The Most Fun You'll Ever Have... BEING SCARED! 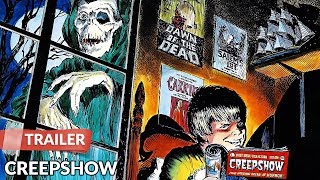 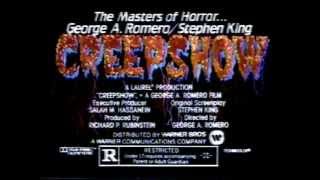 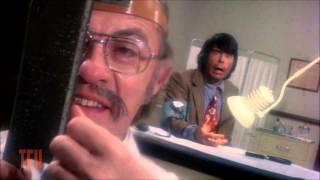 "I want my cake!"
- The undead corpse of Nathan Grantham coming back on Father's Day
"Just tell it to call you Billie!"
- Henry Northrup (Hal Holbrook) after feeding his loudmouthed wife (Adrienne Barbeau) to the monster in the crate

In this collaboration with Stephen King, director George Romero assembles a distinguished cast and pays vividly hued homage to the E.C. horror comics of the 1950s. (This film appeared years before the TALES FROM THE CRYPT series.) Five creepy tales are strung together by a framing story involving a young boy being punished by his father for reading the gruesome, titular comic book. "Father's Day" tells the tale of a family patriarch exacting beyond-the-grave revenge on the daughter who murdered him. In "The Lonesome Death of Jordy Verrill," a Maine hayseed (King himself in a ridiculously over-the-top performance) is overtaken by a meteor-based plant growth. A cuckolded husband exacts watery revenge on his cheating wife and her lover in "Something to Tide You Over." A hairy beast in a box is used for nefarious purposes at a university in "The Crate." Finally, in "They're Creeping Up on You," a wealthy, arrogant New Yorker with a fear of germs has a disturbing run-in with cockroaches during a blackout.

While the stories are a bit brief, the style is appropriate for the anthology format. Romero's use of garish colors to mimic the ink in comic books is visually appealing, preventing the gore on display from being too off-putting. Featuring early appearances by actors such as Ed Harris and Ted Danson, CREEPSHOW is eerie, engaging entertainment.

CREEPSHOW presents five tales of horror, gore, and morbid humor, written by Stephen King and directed by George A. Romero. The film's style is a tribute to E.C. Comics, the campy horror comic books of the 1950s. Beware of (or watch for) a scene featuring hundreds of cockroaches...

28%off
Tales from the Darkside: The Movie
$6.50 Super Savings
Add to Cart

Tales from the Darkside: The Movie (Blu-ray)
$27.50 Super Savings
Add to Cart