In a haunted house a wealthy woman is driven to the brink of insanity by the disembodied spirit of her husband's first wife. 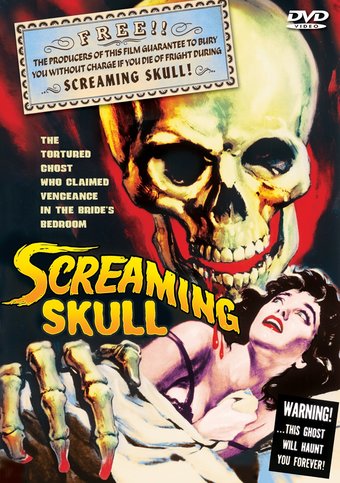 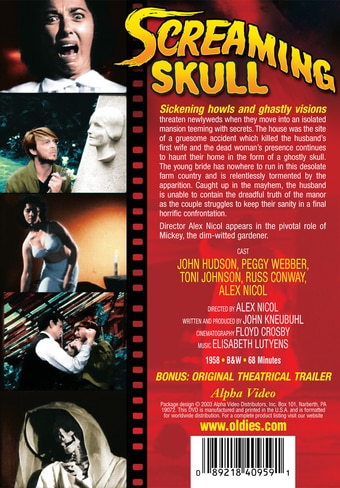 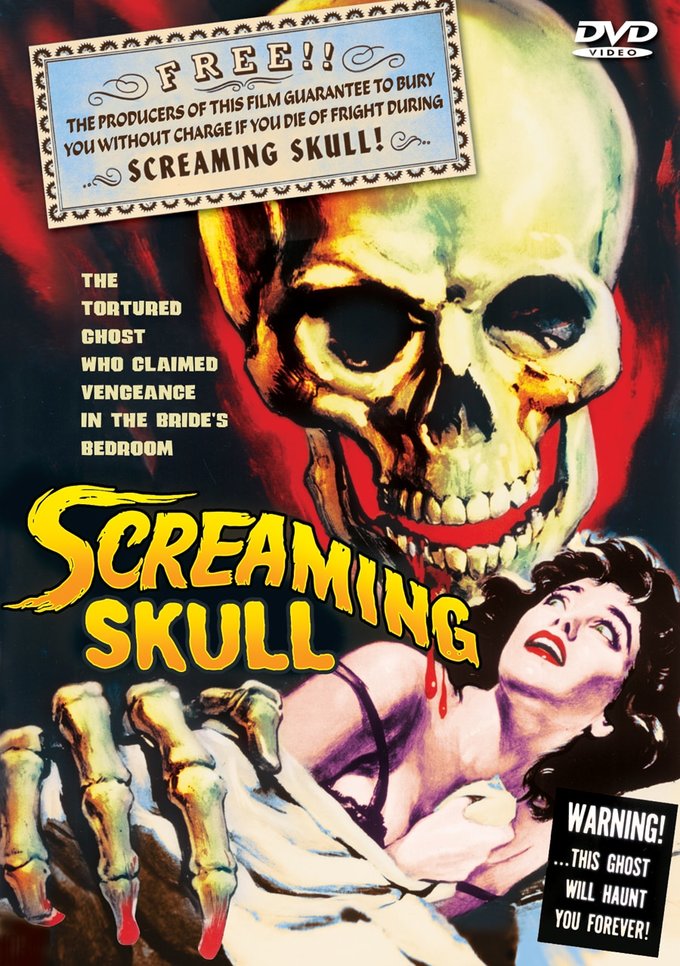 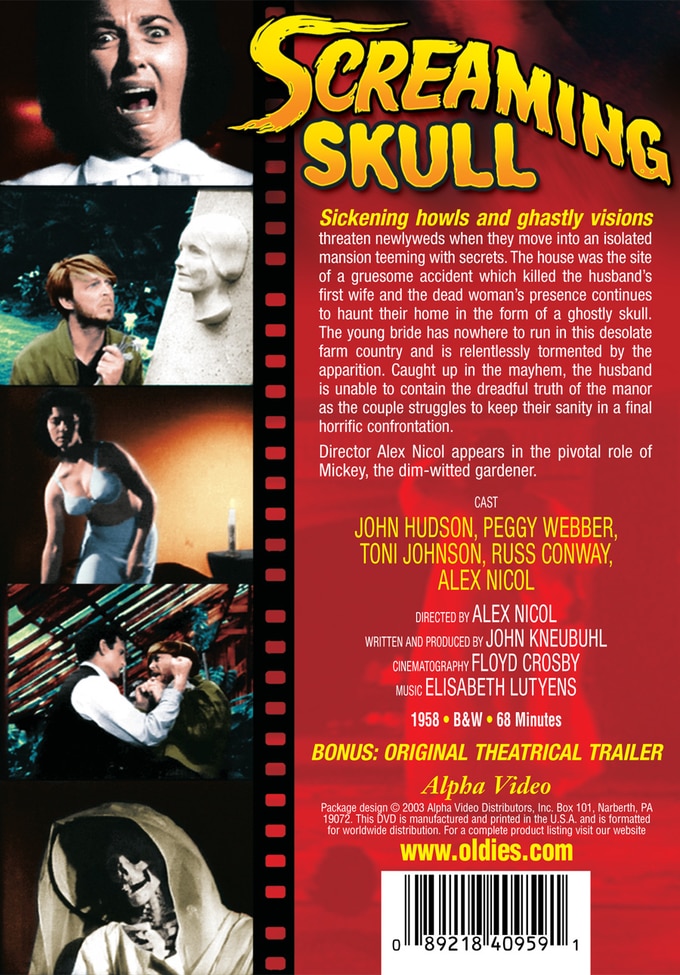 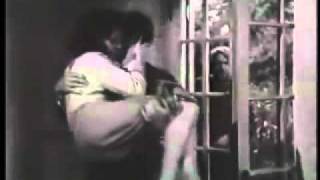 Sickening howls and ghastly visions threaten newlyweds when they move into an isolated mansion teeming with secrets. The house was the site of a gruesome accident which killed the husband's first wife and the dead woman's presence continues to haunt their home in the form of a ghostly skull. The young bride has nowhere to run in this desolate farm country and is relentlessly tormented by the apparition. Caught up in the mayhem, the husband is unable to contain the dreadful truth of the manor as the couple struggles to keep their sanity in a final horrific confrontation. Director Alex Nicol appears in the pivotal role of Mickey, the dim-witted gardener.

A woman is nearly driven mad by images of a spectral skull. Her husband, trying to reassure her, may know more than he admits.

A scheming husband tries driving his wife to suicide so he can get his hands on her money.
Eric marries Jenni, a wealthy woman who was once institutionalized because of mental problems. The couple goes to live in a mansion that Eric inherited after the strange death of his first spouse.
Soon, mysterious things start happening at the estate that cause Jenni great emotional distress. What she doesn't know is that her husband wants her to go mad... and has been responsible for the weird goings-on.
Will Jenni figure out what Eric is up to or will she end up just like his first wife'

Customer Rating:
Based on 4633 ratings.


Although the video quality is only good, it is the best I have seen (the VHS version is worse and when shown on TV, the quality is a bit below what the DVD contains. In addition, you don't have the annoying station logo in the corner of the screen, the pop up promos and commercial breaks to worry about).

While produced on a low budget the film is fascinating to watch (especially for Peggy Webber). No matter how many times you watch it, there is always something new to find. The musical score is a highlight of the film and with only six members in the cast, it does deliver some goose bumps.


This is one of those tasty scare films from the period between the War (WWII) and the gore. It relies on atmosphere to keep you interested. I would give it five stars, but the print used for this copy was pretty beat. Watch it anyway!


The best presentation of this movie on DVD, another great job Alpha!


Take a somewhat normal guy (Eric), now add his new wife (Jenny) who has psychological problems, a creepy gardener (Mickey) and toss them into the "haunted" house where Eric and his first wife lived (and died) and see what happens! Yes, it's a messed up concept, but hey it's supposed to be a scary movie, so why not? Throughout the movie you wonder if the house is really haunted by the screaming skull or if it's one of the characters causing the mysterious happenings. While The Screaming Skull is a lower budget movie, this is one of the better quality versions of this movie I've seen and definetely with buying.

I heard screaming, but there is a definate lull Movie Lover: Spencer Koelle from Pennsylvania -- July, 26, 2004


First, to answer Dave Thielbar, no, Jenney does not look hot in the twelve-layer night gown that passes for "skimpy" at all. Shame on you for even suggesting it.

It took me several viewings to even realize that Mickey was supposed to act as a red herring.

I won't spoil it for you, but the cause of the "mysterious accident" is something that anyone with half a brain will figure out within the first ten minutes of the film.

The soundtrack in the beginning tries to make you tremble with the shocking horror of german oompa music, and the ending score makes it resemble nothing so much as a scary Benny Hill sketch.

The "skullcam" point of view shot was just silly and confusing, and the movie often crossed the line between suspenseful and dull.

That said, it retains a somewhat abstract and chilling nuance, the lurking specter of fear is still there no matter how much films own incompetence tries to drive it away. This is not a movie I'd like to see without a friend or Mike Nelson and his two lovable robots.


For just a moment, all of you kiddies who must be spoonfed your horror movies with gushing computer generated effects and billion dollar budgets may go to the back of the room, leaving the front for us fans of older, classic chillers like "The Screaming Skull". Made in 1958, I still remember enjoying having an icey tingle run down my back watching it on TV in the sixties from my safe hiding place behind the sofa.

As the story opens, we find a newly wedded couple arriving home. It is the groom, Eric's (played by John Hudson) mansion that he inherited from his deceased wife, Mary, who died mysteriously from a smashed skull (!) in the pond on the grounds of the house. Mary must have been some piece of work. Her self portrait in the house and the likeness of her on her tombstone are enough to give you the willies. Here was a woman who could have made a career of haunting houses, dead or alive. Eric's new bride, Jenny (played by Peggy Webber), though well to do, happens to be on thin, cracking psychological ice, and easily frightened. Hmmm. Things begin to bump, bump, screech in the night. Is it the ghost of Eric's first wife, or is it Eric, trying to drive his new wife over the edge to her doom to collect her fortune? You are at first sure, and then not so sure. And what secrets does the half witted gardener, Mickey (played by director Alex Nichol), hide? Do ghosts walk the mansion's dark halls in the dead of night? Does a skull still have a mind of its own so that it comes and goes as it pleases? Is there murderous foul play afoot? Can a half witted gardener direct films? Does Jenney look hot in her skimpies, or what? The answers to all these questions and more await those who dare to face "The Screaming Skull".

The musical score, composed by Elisabeth Lutyens, is brilliantly haunting 50's horror fare that plays no small role in keeping the edge of the viewer's seat warm.

And remember, TSS was made 46 years ago. Watch it and enjoy it as movie goers who shivered and spilled their popcorn in theaters did long ago; back in a time when the unseen horror lurking around the dark corner was far more terrifying than the buckets of gore that now splash the cineplexs' four walls. A little imagination, if you please. C'mon kids. If you're looking for me, I'll be hiding behind the sofa.