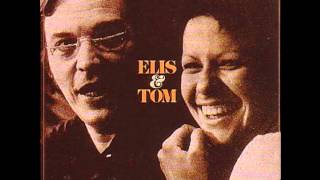 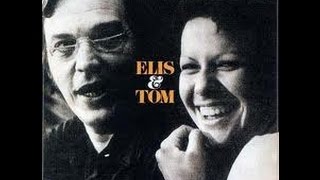 Full performer name: Antonio Carlos Jobim/Elis Regina.
Personnel: Antonio Carlos Jobim (vocals, piano, acoustic guitar); Elis Regina (vocals); Cesar Camargo Mariano (piano, electric piano); Helio Delmiro (acoustic & electric guitars); Oscar Castro Nieves (acoustic guitar); Luizao Maia (bass); Paulo Braga (drums).
Recorded at MGM Studios, Los Angeles, California between February 22 and March 9, 1974. Includes liner notes by Neil Tesser.
In 1974, bossa nova innovator Antonio Carlos Jobim teamed up with Elis Regina, one of Brazil's finest and most beloved singers, for a recording that ranks among the best Brazilian pop albums ever. Jobim's compositions are renowned for their melodicism and intricacy, and they are beautifully showcased here. This is largely due to Regina's masterfully subtle and breathy performances (listen to her slow reading of "Corcovado" for a case study in perfection), but everything about this disc, from the clear, tasteful arrangements to the way the voice of Jobim and Regina interact, is a delight. Alongside select albums by Joao Gilberto and Caetano Veloso, ELIS & TOM is a must-have for even the most casual Brazilian fan.

The Singing Boys of Mexico / The Mariachis of Mexico
Traditional Music of Mexico
$5.98 on Sale
Add to Cart
(6)