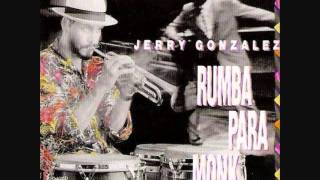 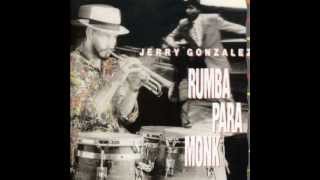 Personnel: Jerry Gonzalez,Steve BErrios, Andy Gonzalez, Carter Jefferson, Larry Willis.
Liner Note Author: Russ Musto.
Recording information: A&R Studios, New York, NY (10/27/1988/10/28/1988).
Photographers: Kathy Rahill; Sandra Eisner.
Jerry Gonzalez has referred to himself as being "bilingual" in that he is equally skilled on trumpet and congas, in bebop and in Latin music. Gonzalez succeeds in his goal of combining the two idioms without watering down either style on this essential Sunnyside CD. The first Afro-Cuban Thelonious Monk tribute has plenty of spots for the percussion of Steve Berrios and Gonzalez, but also contains many strong solos from the leader's often-muted Miles-influenced trumpet, Carter Jefferson's tenor, and Larry Willis' very un-Monk-like piano. With the exception of "Ugly Beauty," the Latin percussion is an integral part of each performance, giving this set of Monk tunes a very different perspective that is also quite flexible. A highly enjoyable set with the highlights including "Bye-Ya," "Nutty," "Little Rootie Tootie," and "Jackie-ing." ~ Scott Yanow

John Coltrane
Both Directions at Once: The Lost Album [Deluxe Ed.] (2-CD)
$19
Add to Cart