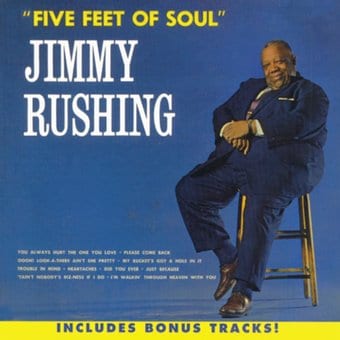 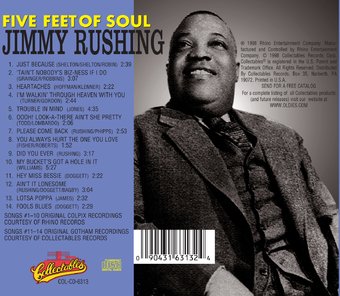 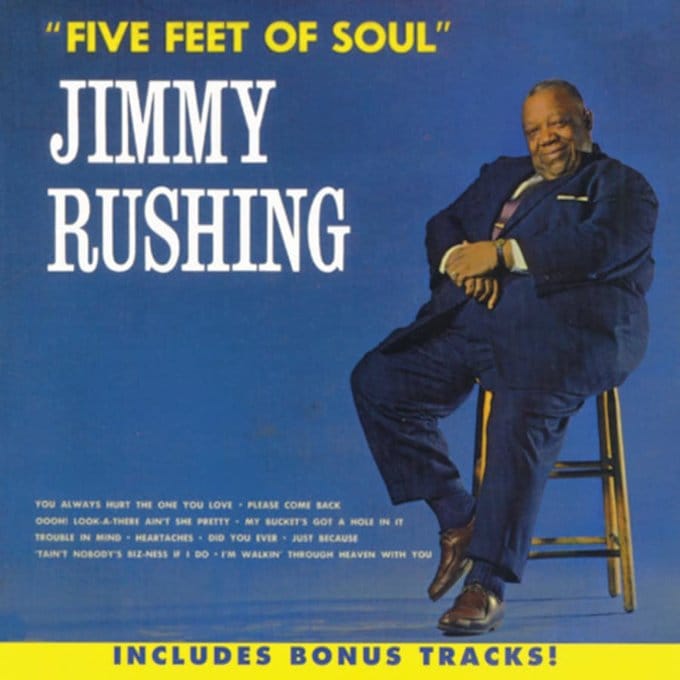 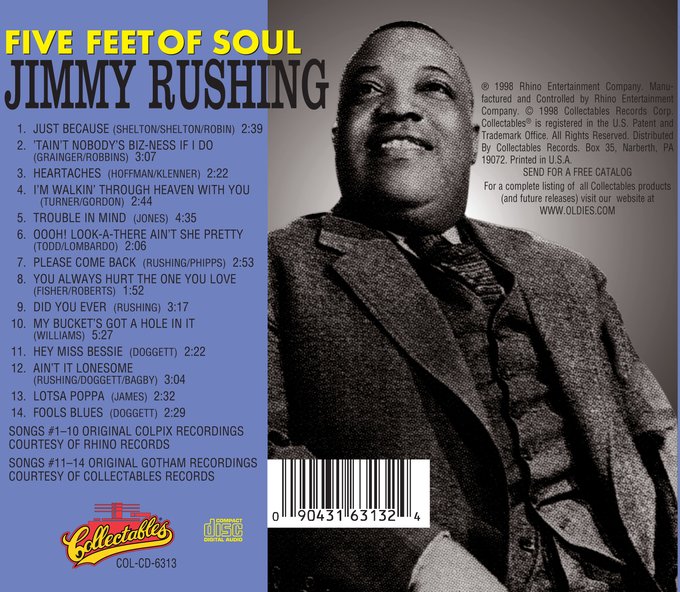 With his small stature and large waist size, Jimmy Rushing was known as "Mr. Five-by-Five". Rushing's loud, clear and strong voice became one of the most distinctive in the Jazz world. He worked with Count Basie, among others. This collection brings together the body of work Rushing recorded for Colpix, and includes bonus tracks.

Includes liner notes by Mark Marymont.
Personnel: Jimmy Rushing (vocals); Al Cohn (arranger); Gene Quill, Phil Woods (alto saxophone); Budd Johnson, Zoot Sims (tenor saxophone); Sol Schlinger (baritone saxophone); Ernie Glow, Markie Markowitz, Joe Newman, Snooky Young (trumpets); Billy Byers, Jimmy Cleveland, Willie Dennis, Urbie Green (trombone); Patti Bown (piano); Freddie Green (guitar); Milt Hinton (bass); Gus Johnson (drums).
Recorded at Webster Hall, New York, New York on January 22 & 23, 1963. Originally released on Colpix (446).
Liner Note Author: Mark Marymont.
Just about to turn 60, Jimmy Rushing recorded his only LP for Colpix in early 1963 with a large group packed with Basie alumni (Freddie Green, Gus Johnson, Joe Newman, Snooky Young, Budd Johnson, Milt Hinton) as well as alto heroes Phil & Quill (aka Phil Woods and Gene Quill) and a pair of tenor mainstays, Zoot Sims and Al Cohn (Cohn actually arranged the date). Despite a host of solo voices (and egos) inherent to the session, Rushing managed the date with his usual good feeling. The songs, most of them ones he had never recorded before, are nevertheless great candidates for the Five-by-Five treatment; "Just Because" and "Heartaches" are especially good, Rushing giving the first a quick, inertia-filled performance, the latter a more graceful blues reading. He also airs a few of his own songs ("Please Come Back" and "Did You Ever"), slides his way through the Bessie Smith/Billie Holiday standard "'Tain't Nobody's Bizness If I Do," and reclaims Clarence Williams' blues standard "My Bucket's Got a Hole in It" from the country audience that had latched onto it. Rushing does betray a sign of his age -- his power in holding lines is obviously diminished from his mid-'50s records with Columbia -- but his joyous sense of swing comes through clearly. ~ John Bush


Jimmy Rushing is at his very best in the congenial surrounding of the all-star big band organized by Al Cohn on the first 10 songs. And he brings his enthusiasm and infectious swing to this band, that does not sound as a studio "mercenaries" gathering. This is really first class