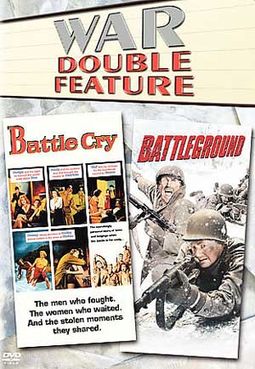 BATTLE CRY: Non-stop action characterizes this World War II epic with an all-star cast. The heroic exploits of a Marine battalion are followed from basic training through the bloody invasion of Aaipan. Newsreel and 'Speedy Gonzales' cartoon are a part of this Leon Uris novel brought to the big screen. Academy Award Nominations: Scoring of a Dramatic or Comedy Picture.

BATTLEGROUND: "Dedicated to the battered bastards of Bastogne," this dramatic historic film directed by William Wellman tells the story of a U.S. Army division in the European theater near the end of World War II. In a last-ditch effort to turn the tide of the war, the Germans launch a final attack that became known as the Battle of the Bulge. George Murphy, who portrays Private Ernest J. "Pop" Stazak, leads a terrific cast that also includes John Hodiak, Ricardo Montalban, and James Whitmore. The film was nominated for four Academy Awards and won two: one for its tight, unpredictable screenplay and one for its evocative black-and-white cinematography.