A Star is Born

Tragic romance between two movie stars, one on the rise and the other whose career is eclipsed. 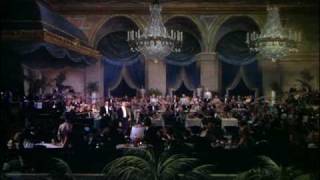 The astounding, whirlwind rise of Esther Blodgett (Janet Gaynor), a farm girl with dreams of making it big in Hollywood is chronicled in this Selznick International classic. Just off the train, Esther's first stop in Tinseltown is to Grauman's Chinese Theatre, where she prophetically steps into the shoe prints of matinee idol Norman Maine (Fredric March). While working a waitress job at a fancy celebrity party, she unexpectedly runs into the legendary Maine, who proceeds to charm her, while carelessly indulging himself with booze. Truly smitten, he persuades production head Oliver Niles (Adolphe Menjou) to give her a screen test, and soon Esther is cast in a lead role paired with Maine - followed by their marriage! An overnight sensation, Esther is transformed into Vicki Lester. As her box-office appeal rises, Maine's popularity declines and his alcohol abuse escalates.

The original Technicolor masterpiece about fame's superficiality and the triumph of love earned Wellman and Robert Carson Academy Awards. A Star Is Born would inspire two musical remakes over the next four decades: the equally hallowed 1954 version starring Judy Garland and James Mason, and the 1976 update with Barbara Streisand and Kris Kristofferson.

The beautifully shot A STAR IS BORN recounts a tragic Hollywood tale of fame and misfortune. As young Esther Blodgett (Janet Gaynor) rises to stardom, her husband, former leading man Norman Maine (Fredric March), is in the midst of a heartbreakingly rapid decline. Gaynor is both genuine and funny as the small-town girl who loses her one great love while she pursues another, and March is perfect as the passé alcoholic has-been. The film received six Academy Award nominations and won a special award for its color cinematography.

Tear Jerker | Love Story | Self-Discovery | Rags To Riches
This product is made-on-demand by the manufacturer using DVD-R recordable media. Almost all DVD players can play DVD-Rs (except for some older models made before 2000) - please consult your owner's manual for formats compatible with your player. These DVD-Rs may not play on all computers or DVD player/recorders. To address this, the manufacturer recommends viewing this product on a DVD player that does not have recording capability.

Customer Rating:
Based on 18374 ratings.


Now everytime I am the center of attention before a crowd of people (and this happens a lot to me) I shout out "Hello Everone, this Mrs. Norman Mane."

Even if you have seen the other two, please get this and watch it.

You will probably not turn gay.