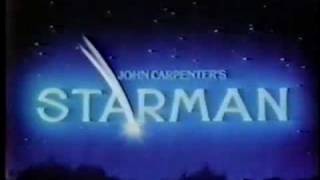 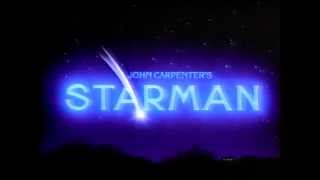 "I watched you very carefully. Red light stop, green light go, yellow light go very fast."
- Starman (Jeff Bridges) to an angry Jenny Hayden (Karen Allen) after he speeds through a yellow traffic light in his first attempt at driving a car
"Would you like to know what I find beautiful about your species' You are your best when things are at their worst."
- Starman

A departure for director John Carpenter, STARMAN is a gentle, simple film that won accolades from critics and applause from audiences. Jeff Bridges plays the title character, an alien that has come down to Earth on a peaceful scouting mission. When he takes the form of a recently widowed woman's dead husband he unintentionally involves her in his mission. The alien only has a few days to reach a rendezvous point where he will be picked up by his mothership. Along the way he must discover what he can about human beings and our civilization. He finds out plenty very quickly, as his relationship with the young widow grows very strong as they make their way to the rendezvous point. Meanwhile, the FBI is in hot pursuit after it discovers the discarded landing vehicle, and the alien's own health is deteriorating in Earth's foreign atmosphere. The story tells of the struggle for communication, the pain of letting go, and the search for understanding. Jeff Bridges gives an unforgettable performance as the gentle alien trying his best to cope with being a human. With STARMAN, Carpenter proves he is a master storyteller, not just of horror and science fiction, but of subtle, emotional drama as well.

A gentle alien lands on Earth and assumes the human form of a Wisconsin woman's recently deceased husband. Eventually, he is assisted by the young woman in a desperate race against time and the FBI to rendezvous with his alien mothership in Arizona. The situation grows more complicated when the woman and the sweet-natured Starman begin to fall in love.