The Who Who - 1964-1968 Under Review: An Independent Critical Analysis 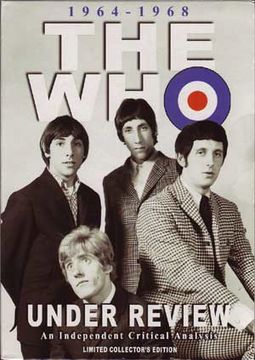 Get email alerts for The Who
5 ratings
Available: Usually ships in 1-3 business days
Add to Cart
Add to Wishlist
Format:  DVD
item number:  CGCK
Related products:
The Who - From the Bush to the Valley: The Keith Moon Years for $18.90
The Who - Maximum R&B Live (2-DVD Deluxe Edition) for $18.70
91% recommend us!

The Who - Under Review 1964-1968 features rare live and studio performances of the band interspersed with the independent review and criticism of a panel of esteemed experts. These include; The Who's early producer Shel Talmy, journalist and author Paolo Hewitt, Keith Moon biographer Alan Clayson, ex Melody Maker journalist and early champion of The Who Chris Welch, Classic Rock Magazine writer Malcolm Dome and a host of other expert contributors. Features rare performances of Im The Face, I Cant Explain, Anyway, Anyhow, Anywhere, My Generation, The Kids Are Alright, Substitute, Im A Boy, Happy Jack, Pictures Of Lily, I Can See For Miles, and many others.