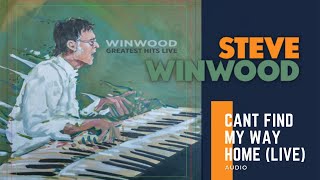 Personnel: Steve Winwood (vocals, guitar, mandolin, Hammond b-3 organ); Jos‚ Neto (guitar); Paul Booth (flute, saxophone, Hammond b-3 organ); Richard Bailey (drums); Edson Da Silva (percussion).
Audio Mixer: James Towler.
Photographer: Anthony Scarlati.
Greatest Hits Live is Steve Winwood's first solo live album and it does an effective job of summarizing the state of his career in the 2010s, since he's spent the time since the 2008 release of Nine Lives touring with various combos. He's developed a long, varied set list that belies the title of this collection, since the 23-track album isn't strictly a stroll through the past. Make no mistake, there are a bunch of hits here -- whether it's oldies from the Spencer Davis Group or his yuppie anthems of the '80s, if there's a Winwood radio staple you can think of, it's present -- but he spends just as much time digging through Traffic's catalog and finding space for covers of Buddy Miles' "Them Changes" and Timmy Thomas' "Why Can't We Live Together," choices that underscore how soulful and jazzy Winwood's latter-day sound is. He and his band take their time, slowing down tempos ("I'm a Man" no longer rushes) and stretching out songs for seven or eight minutes -- enough time for the band to ride a groove and have every musicians solo. Anybody looking for by-the-record versions of his big tunes may be disappointed, but the limber, flexible arrangements are appealing, the band is expert, and Winwood is in fine voice, making this a thoroughly enjoyable affair. ~ Stephen Thomas Erlewine

Continental Drifters
Drifted: In the Beginning & Beyond (2-CD)
$19
Add to Cart

29%off
The Allman Brothers Band
Hell & High Water: The Best of the Arista Years
$9.98 on Sale
Add to Cart

50%off
Bruce Hornsby & The Noisemakers
Rehab Reunion
$8.98 on Sale
Add to Cart