A Monster of Creation’s Dawn Breaks Loose in Our World Today! 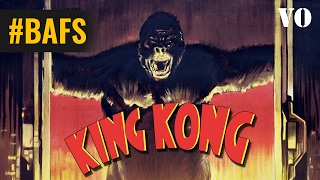 A masterpiece and one of the top moneymakers of the 1930s. Fortune-hunters travel to Skull Island in search of the fabled giant ape "King Kong." Enticing him with the lovely Fay Wray they capture him and bring him back to New York where he escapes and ransacks the city searching for her.

While shooting a jungle movie on the remote Skull Island, filmmaker Denham and his crew stumble upon a prehistoric world populated by dinosaurs and giant snakes. The most dangerous and magnificent of all the unusual and exotic creatures is "King Kong," a fifty-foot gorilla. Using gas bombs, Denham subdues the beast and brings him to New York City, where Kong goes on a rampage, destroying everything in his past and kidnapping a beautiful young actress.