The girls and guys who make the office such a wonderful place to love in! 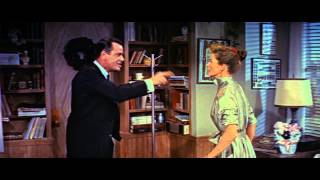 Bunny Watson (Katharine Hepburn) heads up the research department at the Federal Broadcasting Company, a major TV network. And she does her job very well, thank you very much. Assigned by the network president to introduce computers into some of the department's functions, Richard Sumner (Spencer Tracy) arrives at Bunny's well-run division to observe daily activities. Unfortunately, however, Sumner is ordered to keep his mission secret. As a result, the whole staff believes they are being replaced. To make matters worse, there appears to be more than a little electricity between Bunny and Sumner, which upsets Bunny's boyfriend Mike (Gig Young). As tension in the office mounts, so do the laughs in this classic romantic comedy!

The legendary screen duo of Spencer Tracy and Katharine Hepburn bring their keen comic timing and elegant, palpable chemistry to Walter Lang's DESK SET. Hepburn is cast as Bunny Watson, an exceedingly feminine reference librarian in a longtime lukewarm relationship with TV executive Mike Cutler (Gig Young). Tracy plays Richard Sumner, a hardheaded computer whiz who has designed a system named Miss Emmy to replace Bunny and the rest of her staff. Bunny and Richard clash at first, but their fiery encounters soon begin to take on an unmistakably romantic glow. Lang's film features an excellent script by Henry and Phoebe Ephron, adapted from the play by William Marchant. The sharp, hilarious dialogue is delivered with flair by Tracy and Hepburn, who had played opposite each other seven times before filming began. Fine work from supporting actors Young and Joan Blondell, as well as some unintentionally amusing 1950s conceptions of a computerized world, round out DESK SET's overflowing collection of buoyant charms.

State of The Union
$13.30 Super Savings
Add to Cart