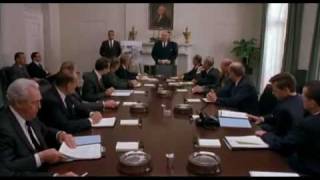 A series of beautiful but devastating atomic explosions provides a vision of gorgeous, appalling destruction that hangs ominously over the political drama of THIRTEEN DAYS. It's October 16, 1962 and, it is not just another day at the office for Kenneth O'Donnell (Kevin Costner), the Special Assistant to President John F. Kennedy (Bruce Greenwood). The President has just been handed a series of photographs taken from a U-2 spy plane over Cuba, showing deployed Soviet missile launchers capable of firing medium-range ballistic missiles that could hit most major US cities within minutes.

THIRTEEN DAYS is a vivid dramatization of what happened in the Kennedy White House during the 1962 Cuban Missile Crisis. Seen through the eyes of O'Donnell, it is a close-up view of President Kennedy and his brother, Attorney General Robert F. Kennedy (Steven Culp), as they try to handle a crisis that has many of their closest advisors ready to wage what all feared might have been the ultimate war. The script, by David Self, is based on interviews, CIA documents, and White House tapes. Director Roger Donaldson captures the extraordinary tension in the White House as he brings to life every heart-stopping moment.

Customer Rating:
Based on 84947 ratings.


I owed a copy of this excellent retelling of what went down during those 13 fatefull days in October of 1962 during the Kennedy administration.

The film recounts the whole thing . From start to finish!
I give this movie 5 Stars also stars Kevin Kostner as Kenny O'Donnel, and Stephen Culp as Robert Kennedy!

One thing that they didn't show to the viewers was that Beetle Smith who planned and executed the Bay of Pigs operation had a secret meeting with president Kennedy in which he brings with him the current news paper takes it out of his over coat pocket slams the news paper on the table and he exclaims to the startled Kennedy "Too,much damn publicity !" And that's why the mission failed! Kennedy apparently tipped off Cuba and Castrol in advance! And that was a big mistake by Kennedy!