320K ratings
Currently Out of Stock: We'll get more as soon as possible
Notify Me When Available
Add to Wishlist
Format:  Blu-ray
sku:  XD 23296BR
Also released as:
Four Weddings and a Funeral (25th Anniversary Edition) (Blu-ray) for $20.50
Our customers love us! 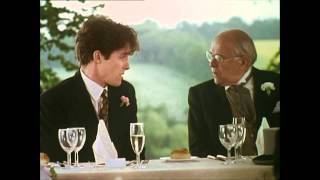 Charles (Hugh Grant) is a confirmed British bachelor with a colorful romantic background who meets the perfect woman, Carrie (Andie MacDowell), at a friend's wedding. However, Charles's hopes of romance are dashed when Carrie announces she must return to America the next morning. The two continue to cross paths at other people's weddings, never finding each other at a time when both are single. As all of Charles's friends find love, he's left wondering if he will ever be the one going to the altar.

With subtle and lighthearted storytelling, director Mike Newell makes viewers feel intimate with characters who are shown in their happiest and saddest moments. The talented, funny cast--including Kristin Scott Thomas, Simon Callow, and Rowan Atkinson--portrays a very convincing group of friends in search of true love.

In Mike Newell's FOUR WEDDINGS AND A FUNERAL, a perennial British bachelor with meets a beautiful American woman at a friend's wedding but finds their chance at romance prevented by her return to the States. Surprisingly, the two keep running into each other but never at the right time.