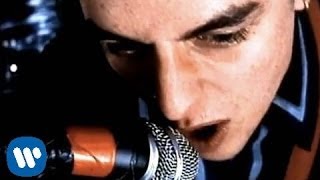 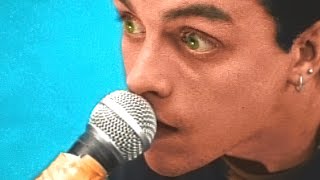 Green Day: Billie Joe Armstrong (vocals, guitar); Michael Pritchard (bass, background vocals); Tre Cool (drums).
DOOKIE won the 1995 Grammy Award for Best Alternative Music Performance. Green Day was also nominated for Best New Artist, "Basket Case" was nominated for Best Rock Performance By A Duo Or Group With Vocal, and "Longview" was nominated for Best Hard Rock Performance.
In the days before there was grunge or thrash, a movement called punk arose as a populist response to the conformity of corporate rock, and a return to the garage roots of the music. Punk, new wave...whatever you want to call it, the movement was quickly co-opted by the major labels and radio as the best bands quickly evaporated into the pop mainstream while the rest faded into obscurity or day jobs.
"I'm not growing up, I'm just burning out, and I stepped in line to walk amongst the dead," singer-guitarist Billy Joe screams on the opening "Burnout," enunciating a timely slacker sentiment over a decidedly punk trio track, roaring through your speakers like a freight train powered by old Ramones and Clash records. One can hear the complaints of DOOKIE articulated in a thousand smoke-filled bedrooms throughout America. On "Longview," tongue not so firmly implanted in cheek, they extend their view of slacker apathy to apply to the fading joys of masturbation, but quickly answer their own ennui with the real world complaints of "Welcome To Paradise," begging the question, is there anything out there?
On a song like "She," Green Day seemingly answers all the questions of apathy with a furious groove and lyrics that urge listeners "locked up in a world that's been planned for you" to "smash the silence with the brick of self-control." And with "Sassafrass Roots" Green Day ups the slacker ante dealt up by Beck on "Loser" by asking, "So why are you alone wasting your time, when you could be with me wasting your time...may I waste your time, too?" The humor and furious musicianship Green Day display on DOOKIE (listen to them echo "Sweet Home Alabama" on "When I Come Around") undercuts all the talk of apathy, confusion and lack of direction by providing a whaling home-grown alternative to business as usual rock. And wasn't that what punk was all about?