Rolling Stone: Ranked #82 in Rolling Stone's "500 Greatest Albums Of All Time" - "...Like Hendrix, AXIS was cryptic and bewitching..." 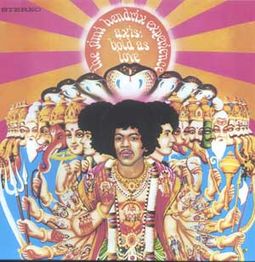 The Original Classic Album Available on 180Gram Audiophile LP With Gatefold Jacket and Color LP Booklet. The sensational sophomore release of The Jimi Hendrix Experience features the seminal classics "Spanish Castle Magic," "Little Wing," "Castles Made Of Sand," and the classic Easy Rider anthem, "If 6 Was 9."

This 1997 reissue of AXIS: BOLD AS LOVE is a newly remastered version that restores the original album artwork. It is among the first batch of albums on Experience Hendrix, a new label controlled by Hendrix's family.
The Jimi Hendrix Experience: Jimi Hendrix (vocals, electic guitar); Noel Redding (vocals, bass); Mitch Mitchell (drums, background vocals).
Recorded at Olympic Studios, London, England.
Originally released on Reprise.
Includes liner notes by Jym Fahey.
AXIS: BOLD AS LOVE was the follow-up to ARE YOU EXPERIENCED?, and represented a much more conscious use of the recording studio's possibilities. Where his live shows continued to showcase the raw rocking power of the Experience, the recording studio gave Hendrix the composer/arranger a broader palette. There are still plenty of powerful blues/rock-inflected songs, such as the menacing "If 6 Was 9," the rolling "Spanish Castle Magic" and the spatial title tune. But "Up from the Skies" is a jazzy trio romp, featuring Hendrix's bluesy, vocalized wah-wah pedal. And on the ballads "Little Wing" and "Castles Made of Sand," Hendrix shifts the focus from the band to the silvery chord/melody accompaniments he often employed to complement his vocals. They are an orchestral effect unto themselves.