Bride of the Monster (Includes Color and B&W Versions)

Currently Out of Stock: We'll get more as soon as possible
Notify Me When Available
Add to Wishlist
Format:  DVD
sku:  XLEG 428D
More products that might interest you:
Classic Horror Collection: 20 Full Color Vintage Movie Postcards (Movie Collectible) $4.78
Our customers love us! 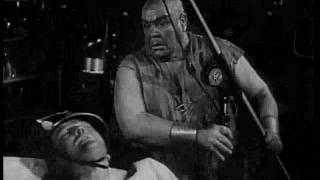 A mad scientist attempts to develop a species of superhumans by using atomic energy. With twelve men missing, the police are hot on the tail of the scientist, who also kidnaps a nosy female reporter to make her the "bride of the atom."