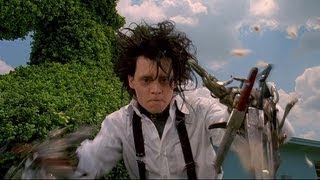 In Tim Burton's EDWARD SCISSORHANDS, a suburban fairy tale with incredibly imaginative sets, an Avon lady, Peg Boggs (Dianne Wiest), discovers the half-finished experiment--a man/monster named Edward (Johnny Depp)--of a mad scientist (played magically by Vincent Price) living in the neighborhood's old abandoned castle. The scientist died before replacing the shy man's large shears with real hands. When Peg attempts to bring Edward into her suburban world, to live among her skeptical family (husband Alan Arkin and daughter Winona Ryder) and gossipy neighbors, his hands--dangerous yet capable of creating things of great beauty--make for some awkward, funny, and poignant situations: Edward as a topiary gardener, Edward as a cutting-edge hair stylist. EDWARD SCISSORHANDS is a story about tolerance, difference, and creativity as much as it is a story of a young man's coming of age (the young man in question is, of course, a monster). In the ironically surreal world of Edward's suburban community, he must try to find his place in it, and in the world at large.

A fairy tale, EDWARD SCISSORHANDS is a brilliant story of a man-made experiment: a monster with long shears for hands. Edward lives in the dark and forbidding castle, overlooking a brightly colored suburb, until the Avon lady comes calling one day. Her motherly instincts tell her to take this poor, lonely creature home to live with her family. There, Edward goes through a series of growing experiences, some of them funny, some of them frightening, while trying to find his place in the world.

Charlie and the Chocolate Factory (Blu-ray)
$10
Add to Cart

Charlie and the Chocolate Factory
$14.50
Add to Cart