Stand by Me R 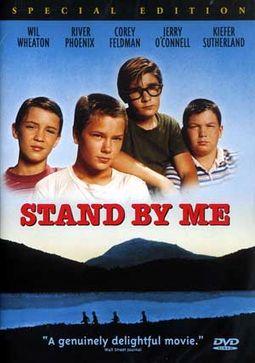 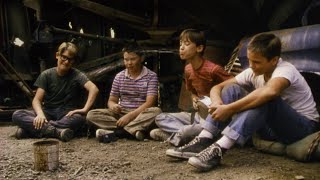 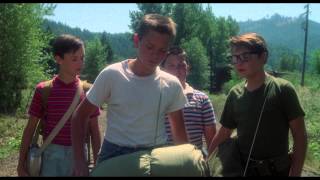 Stand By Me - Trailer (Clip)

"Do you play football'"--Mr. Quidaciolou (Bruce Kirby)
"No."--Gordie Lachance (Wil Wheaton)
"Well, what do you do'"--Mr. Quidaciolou
"I don't know."
- Gordie
"I just want to go somewhere where nobody knows who I am."
- Chris Chambers (River Phoenix)
"Finding new and preferably disgusting ways to disparage one's mother was always held in high regard."
- Adult Gordie (Richard Dreyfuss) in voice-over
"We sat there all night talking about all the things boys talk about before they discover girls."
- Adult Gordie in voice-over before the following montage
"So Mickey's a mouse, Donald's a duck, but what is Goofy'"--Gordie
"If I could have one kind of food, that's easy: Cherry Pez. Definitely Cherry Pez."--Vern
"A dog, Goofy's definitely a dog."--Chris
"I always knew THE $64,000 QUESTION was fake. I mean, who could possibly know that much about opera'"--Gordie
"How can he be a dog' He drives a car and wears a hat."--Teddy
"The thing about WAGON TRAIN is they never got anywhere. They just kept wagon training."--Gordie
"Yeah, Goofy's definitely a dog."
- Chris
"You think Mighty Mouse could beat up Superman'"--Vern
"What are you' Cracked'!"--Teddy
"I don't know. I once saw Mighty Mouse hold up five elephants with his one hand."--Vern
"Boy, you don't know nothing. Mighty Mouse is a cartoon. Superman is a real guy. There's no way a cartoon could beat up a real guy."--Teddy
"Yeah. But it'd be a good fight, though."
- Vern

Based on Stephen King's novella THE BODY, director Rob Reiner's STAND BY ME is the disarmingly tender and subtly sublime story of four kids on the precipice of early adulthood who embark upon a quest. There's Gordie (Wil Wheaton), the intelligent, creative one with the obviously bright future. His best buddy, Chris (River Phoenix), hardens his image in order to hide the pain from the physical abuse he endures at home, all the while harboring the hope of escaping that image. Rounding out the foursome are Vern (Jerry O'Connell), the pudgy tagalong, and Teddy (Corey Feldman), a loyal and funny but troubled kid with a death wish.

When the four boys hear about a dead body 20 miles down the railroad tracks from their small Oregon town, they clandestinely set upon the unwieldy journey to lay eyes on this rare find. Amid numerous misadventures, Gordie, Chris, Vern, and Teddy savor what may be their last chance to revel in the simple life of children; around the corner is a future that could tear them apart, not to mention a tough teen gang who desires local fame by finding the body first. Enhanced by excellent performances and an engaging plot, STAND BY ME ranks among the best of the myriad coming-of-age films to dot the 1980s cinematic landscape.

STAND BY ME, set in Oregon in 1959, portrays the friendship of four boys who go on an overnight camping trip to find a missing teenager's body. Along the way they encounter a number of obstacles, including a gang of older teens and their own inner problems, ultimately finding out more about themselves along the way.