Melody Maker: 5 stars out of 5 - "...Irresistible....27 Number One singles....This is as much pop culture education on one CD as any music fan needs."

Get email alerts for The Beatles
Currently Out of Stock: We'll get more as soon as possible
Notify Me When Available
Add to Wishlist
Format:  CD
sku:  ZNLX 5676
92% recommend us! 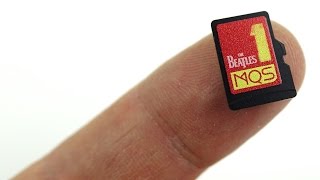 The Beatles: John Lennon, Paul McCartney, George Harrison, Ringo Starr.
Includes a 30-page color booklet documenting artwork for all the number one singles recorded by The Beatles.
Engineers include: Norman Smith, Geoff Emerick, Barry Sheffield.
Recorded at Apple, Olympic Sound, Trident and Abbey Road Studios, London, England; Pathe Marconi, Paris, France, between 1962 & 1970. Includes liner notes by George Martin.
Digitally remastered by Peter Mew (2000, Abbey Road Studios, London, England).
For the six years the Beatles were recording for Capitol Records, the Fab Four ascended to top of the American and British charts an astonishing 27 times. This single-disc compilation brings those hits together in one place to span every phase of the foursome's highly influential career. Early Merseybeat-flavored sides like "Love Me Do" (the band's first Stateside hit), "She Loves You," and "I Want To Hold Your Hand" struck a chord early on with hordes of screaming teens. Unfortunately, this found the band temporarily dismissed as mere teen idols despite these numbers coming as a result of the vaunted Lennon/McCartney songwriting partnership.
The timeless "Yesterday" struck a worldwide chord (and subsequently became one of the most played songs of all time) and Liverpool's favorite sons soon found themselves shifting gears. They were soon dabbling with flower power ("All You Need is Love"), character-driven storytelling ("Eleanor Rigby"), and allowing glimpses behind the Beatles curtain ("Hey Jude," "The Ballad of John & Yoko"). By the time "The Long and Winding Road" became the Beatles' chart-topping swan song, popular music's landscape had been permanently altered.