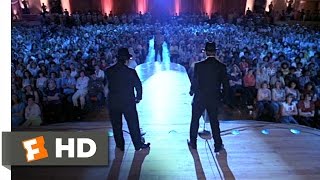 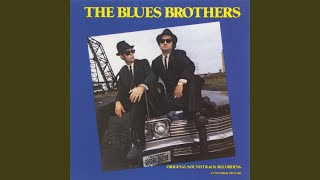 The Blues Brothers Band: John Belushi (vocals); Steve Cropper, Matt Murphy (guitar); Dan Ackroyd (harmonica); Tom Scott, Lou Marini (tenor saxophone); Al Rubin (trumpet); Murphy Dunne, Paul Shaffer (keyboards); Donald Dunn (bass); Steve Jordan, Willie Hall (drums).
All tracks have been digitally remastered.
Personnel: Elwood Blues (vocals, harmonica); "Joliet" Jake Blues, John Belushi (vocals); Matt "Guitar" Murphy (guitar).
Unknown Contributor Roles: Steve Jordan ; Donald "Duck" Dunn; Murphy Dunne; Alan Rubin; Lou Marini; Steve Cropper; Tom Scott; Willie Hall.
The title of The Blues Brothers Complete pretty much says it all; the double-disc, 35-track collection contains everything Jake and Elwood Blues recorded during the peak of their career. The catch is that the compilation was only released by EastWest/Atlantic's Australian division, therefore, it's hard to find outside of Australia. But, for hardcore fans, it's worth tracking down since it has every track from Briefcase Full of Blues, the soundtrack to The Blues Brothers (including the selections sung by Cab Calloway, James Brown, and Aretha Franklin), and Made in America, plus "I Ain't Got You," which was only on The Best of the Blues Brothers, and "From the Bottom," which was the B-side of the "Soul Man" single. In other words, it's everything. Some may laugh that anyone would want the complete works of the Blues Brothers who were often considered a joke (especially by blues purists), but in hindsight, these recordings don't sound bad at all. How could they when Belushi and Aykroyd were backed by a world-class studio band. And, a lot can be said for enthusiasm. No, Belushi wasn't the greatest vocalist, and neither was his brother, but he had true love and passion for this music, which translates in his performances. The result may not match the original recordings they strove to replicate, but they're fun and they undoubtedly introduced many listeners to the original artists. Strangely, that's the reason why they hold up fairly well; they were labors of love and that love is apparent throughout the recordings, from the truly impeccable song selection (they did have good taste) to the enthusiastic performances. ~ Stephen Thomas Erlewine

The Blues Brothers
The Definitive Collection (2-CD)
$15.30
Add to Cart

The Blues Brothers
Can't Turn You Loose
$18.10
Add to Cart