Buy the ticket, take the ride 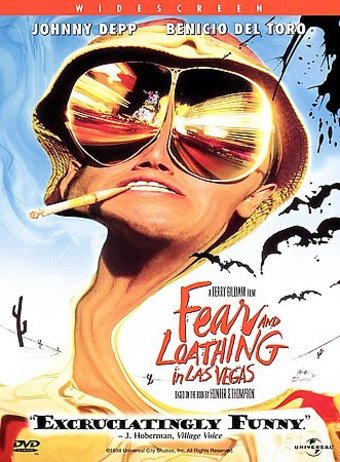 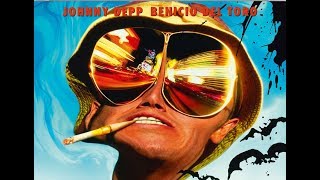 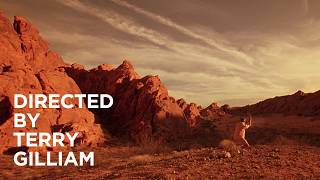 "I think I'm getting the fear."
- Dr. Gonzo (Benicio Del Toro) to Raoul Duke (Johnny Depp)
"There I am...uh, clearly I was a victim of the drug explosion."
- Duke when he sees the real Hunter S. Thompson
"Wait! We can't stop here! This is bat country!"
- Duke to Dr. Gonzo

FEAR AND LOATHING IN LAS VEGAS is a whirlwind of a movie, a wacky, drug-laden story backed by a fist-pumping rock & roll soundtrack featuring everything from Wayne Newton and Tom Jones to Combustible Edison and Dead Kennedys. Journalist Raoul Duke (Johnny Depp) heads to Las Vegas to cover a motorcycle race, bringing along his Samoan lawyer, Dr. Gonzo (Benicio Del Toro), in this furious adaptation of the book by Hunter S. Thompson. It is 1971, and Duke and Gonzo are on their way to Sin City with a frightened hitchhiker (a nearly unrecognizable Tobey Maguire) and a trunkful of drugs, which they ingest nonstop. Depp is terrific as Duke, Thompson's alter ego, and Del Toro is a riot as the crazy lawyer. To perfect his Thompsonian performance, Depp spent a lot of time with the good doctor, and it paid off in a film that captures the frenetic pace of the counterculture novel. Director Terry Gilliam, a master of complex, bizarre visual imagery, has a field day interpreting the drug-hazed world in which Duke and Gonzo reside. An all-star cast chimes in with wonderfully offbeat bit parts, including Harry Dean Stanton, Gilliam regular Katherine Helmond, Flea, Cameron Diaz, Ellen Barkin, Christina Ricci, Gary Busey, Lyle Lovett, and others.

16%off
The Imaginarium of Doctor Parnassus
$12.60 Super Savings
Add to Cart