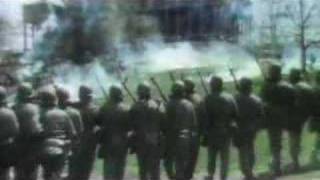 In GONZO: THE LIFE AND WORK OF DR. HUNTER S. THOMPSON, director Alex Gibney (TAXI TO THE DARK SIDE) creates a portrait of one of journalism's most controversial and talented superstars. Famous in the 1960s for his wild, self-coined "gonzo" style of reporting, Thompson's most famous adventures include riding with the Hell's Angels, chasing the American dream in Las Vegas, and covering the volatile George McGovern political campaign. The fact that Thompson did most of his reporting while throwing back large quantities of Wild Turkey and illegal drugs led to some of the most bizarre and imaginative journalism the writing world had ever seen.

Gibney pieces Thompson's life together using archival footage and recordings and interviews with those closest to him, including his former wives and son, and the artist Ralph Steadman. There are also appearances and commentary from the likes of Rolling Stone founder Jann Wenner, as well as conservative heavyweight Pat Buchanan. Johnny Depp, who played Thompson in the film version of FEAR AND LOATHING IN LAS VEGAS, provides the voice of Thompson, reading excerpts of his writings. The result is an engaging, lively biography that paints a life that was as tragic as it was passion-filled. Thompson's suicide in 2005 officially cemented his place in history as one of literature's wildest, most enigmatic hell-raisers.

Narrated by Johnny Depp, this Collector's Edition takes a probing look into the uncanny life of Dr. Hunter S. Thompson--inventor of gonzo journalism and author of the landmark "Fear and Loathing in Las Vegas."

Where the Buffalo Roam
$13 Super Savings
Add to Cart

The Kid Stays in the Picture
$4.89 on Sale
Add to Cart

The Kid Stays in the Picture
$19
Add to Cart