Robin and the 7 Hoods 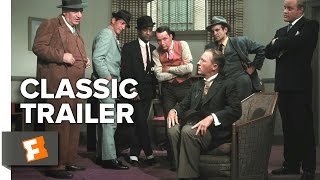 Mob-ruled 1928 Chicago's not big enough for the rat-a-tat comedy and songs of this popular favorite about the do-gooder gangsters who fleece the rich and give to the poor as a front for their "not-so-legal" activities. Academy Award Nominations: 2, including Best Song ("My Kind of Town"), Best (Adapted) Score.

A Chicago gangster, called Robbo, tries to hide fifty thousand ill gotten, and very hot, dollars by donating the loot to the Blessed Shelter Orphans Home. The result is a lot of good press and public adulation for Robbo, who finds he really enjoys the fringe benefits of his new public image. So much so, in fact, that he and his henchmen decide to open up a mission for the poor souls on Poverty Row -- of course they might just do a little gambling in the back room from time to time.