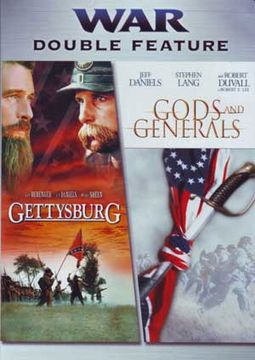 GODS AND GENERALS: This epic film from writer-director Ron Maxwell chronicles the early events of the American Civil War. It's a prequel to his earlier GETTYSBURG, with some of the same cast, and is part of a planned trilogy. Stephen Lang plays Thomas "Stonewall" Jackson, the famous (and deeply religious) Confederate general who, along with fellow General Robert E. Lee (Robert Duvall), must weigh the mighty consequences of his actions, as each battle costs the lives of thousands of men. Over on the Union side there's Jeff Daniels as Colonel Joshua Chamberlain, who, like Jackson and Lee, is fond of making long, poetic speeches to his troops. Beginning with the start of the war and ending with Jackson's death, the film chronicles the three main battles leading up to Gettysburg, using their actual locations and thousands of actual Civil War re-enactors as extras. Maxwell pays careful attention to authentic period detail as he chronicles the minutiae of the generals' domestic lives in the intervals between the harrowing battle scenes. While a little on the long side, the end result should serve as an invaluable document for history buffs. Mogul Ted Turner was an executive producer and appears in a small role.

GETTYSBURGH: The TNT original GETTYSBURG is a sweeping production depicting the events that led up to the Battle of Gettysburg and the three-day battle itself, which claimed tens of thousands of lives, turned the tide of the Civil War, and eventually put an end to slavery in the United States. An excellent production illuminating the horrors and heroes of this uniquely idealistic war, the film boasts terrific performances from Jeff Daniels, Tom Berenger, and Martin Sheen. The screenplay was based on the best-selling novel THE KILLER ANGELS by Michael Shaara.