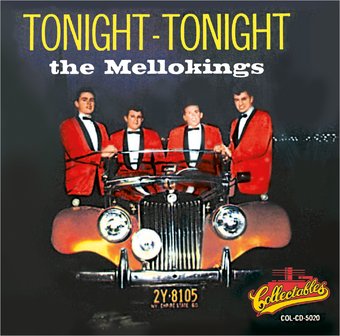 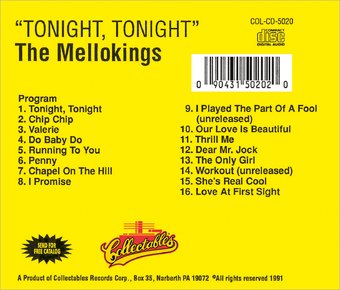 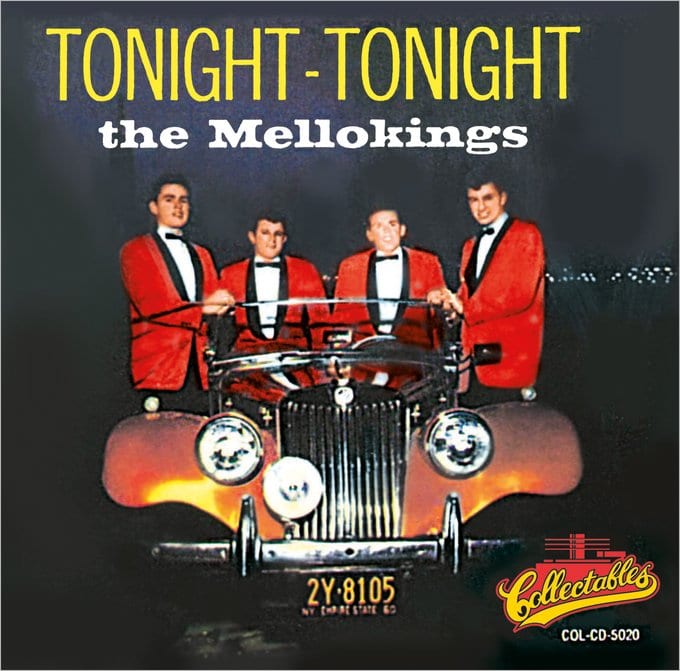 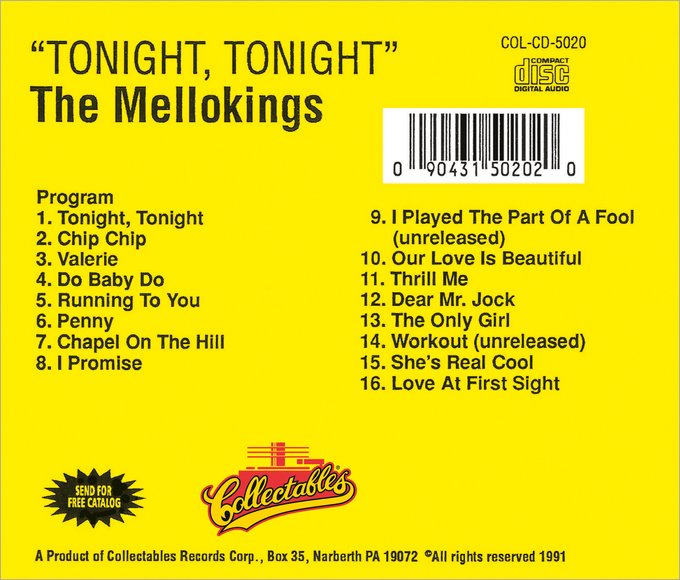 Get email alerts for The Mello Kings
19 ratings
Available: Usually ships in 1-3 business days
Add to Cart
Add to Wishlist
Format:  CD-R
item number:  COL 5020
Also available in a set:
Only the Best of the Great Groups, Volume 2 (10-CD Bundle Pack) for $50.98
91% recommend us!

Not to be confused with the Mellotones, the Mello Kings were a vocal harmony group that rose to fame in the late '50s. This disc is highlighted by their hit "Tonight, Tonight", one of the most popular golden oldies of all time.

Includes liner notes by Charlie Horner.
Liner Note Author: Charlie Horner.
The Mello-Kings' name appeared variously on record labels as the Mello-Kings, the Mello Kings, and the Mellokings. Their lone national hit, "Tonight, Tonight," charted twice in the bottom of the Billboard Top 100 in 1957 and 1961. The song has since gone on to become an unusually well-remembered oldie given its low chart positions, appearing on far more compilations than many major hits of the era. Tonight, Tonight rounds up most of the single sides and album tracks the Mello-Kings recorded for Herald Records in the '50s and early '60s, with brief liner notes and no session information or recording dates. The group alternates between attractive doo wop ballads and uptempo songs in a variety of modes, from the Latin rhythms of "Thrill Me" to the unique stop-and-start arrangement and prominent electric bass of "Chip Chip." The Mello-Kings' vocal performances are consistently fine, even on the two previously unreleased cuts, which is more than you might expect from a minor indie-label vocal group. Relic Records released a now out of print Mello-Kings anthology with the same title that has five additional tracks, but Collectables' disc is more easily obtainable and will satisfy all but the most dedicated collectors. ~ Greg Adams

51%off
The Chantels
Maybe: Their Greatest Recordings
$8.39 Super Savings
Add to Cart


i was please with this album i like the different styles of harmonys , from fast to slow tracks