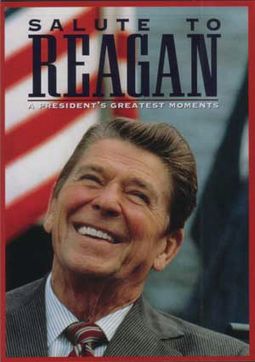 President Reagan once remarked "I don't know how anybody could do this job without having been an actor." Perhaps better than any other U.S. President, Ronald Wilson Reagan understood how to articulate his vision and touch the hearts of the American people. Salute To Reagan is a celebration of those many great moments when Reagan awakened within us a forgotten patriotism, a renewed optimism and, often, a good laugh.

Relive all Reagan's most memorable quotes, from his inaugural words, "We are too great a nation to limit ourselves to small dreams," to the commanding "Mr. Gorbachev, tear down this wall!" Witness the conviction with which he speaks on the role of government, the necessity of military strength, and the "evil" of communism. See Reagan comfort a nation during the aftermath of the Challenger disaster and tenderly commemorate the veterans of D-Day. Plus, laugh along as Reagan wins over fans and foes alike with his trademark warmth and humor. Finally, enjoy the moving filmed Reagan tribute shown at the 1996 Republican National Convention - seven years after he left office - followed by Nancy Reagan's accompanying heartfelt speech on behalf of her husband. Salute To Reagan captures Ronald Reagan's vision, patriotism, personal conviction, and genuine warmth in this commemorative program that you will enjoy again and again.

SALUTE TO REAGAN takes a look back at some of the 40th U.S. President's greatest moments and most memorable quotes. From his views on the role of government to the necessity of military strength, this commemorative program will serve as a reminder of the beliefs and actions of this controversial two-term leader. Also included is the moving tribute shown at the 1996 Republican National Convention, followed by the speech made by Nancy Reagan.