Every Second Chance Begins With a First Step 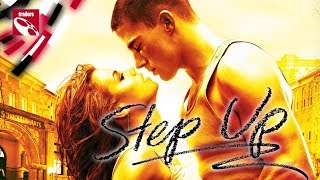 Fans of DIRTY DANCING and FAME will dig the moves in this tale of a sullen young thug named Tyler (Channing Tatum) who winds up doing community service at the Baltimore High School for the Performing Arts. At first he's just smirking and mopping the floors, but then Nora (Jenna Dewan), a talented dancer and choreographer, loses her partner to a fractured ankle mere weeks before the big showcase, and Tyler steps in as her partner. At first he doesn't take it too seriously but then again, he's never had a real chance in life. His best friend from the street (Damaine Radcliff) gets jealous and forces Tyler to decide which side of the tracks he thinks he belongs on. Meanwhile, romance heats up between Tyler and Nora, and there's some side business with the school's hip-hop composer (Mario) falling in love with Nora's hot friend Lucy (Drew Sidora), who is going out with an older man--a successful artist who cheats on her. As far as dramatic steps go, that's all fairly by the numbers, but the performances are strong. (Tatum manages to be charismatic while playing his character like a real high school kid, that is to say, monosyllabically.) The dialogue crackles and the editing is tight, while the big dance climax is, of course, a crowd-pleasing showstopper. Rachel Griffiths (SIX FEET UNDER) plays the school principal. Alyson Stoner connects with some warmth and spontaneity as Tatum's little sister, as does rapper Heavy D in a bit part as a local crime lord.