Women on the Verge of a Nervous Breakdown R

A comedy about someone you know 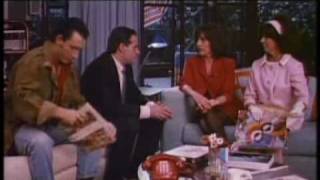 Women on the verge of a nervous breakdown trailer Almodovar

"How many men have you had to forget'"--Ivan (Fernando Guillén) to Pepa (Carmen Maura)
"As many as the women you remember."
- Pepa
"For two days everyone has been saying no to me. Now it's my turn to say no."
- Pepa

This colorful hit put director Pedro Almodóvar on the international map and cemented the reputation of its star, Carmen Maura. The film is a peppy little soap bubble as TV actress Pepa (Maura) wakes up to find a note from her lover, Ivan (Fernando Guillén), informing her he is leaving. Desperate to tell him some important information, Pepa almost kills herself with sleeping pills, burns her bed, and spends most of the movie trying to track him down. Her adventures put her in contact with Ivan's insane ex-wife (Julieta Serrano), his handsome son (Antonio Banderas), and the son's fiancée (Rossy de Palma). They all descend on her penthouse apartment in a deliriously comic extended scene, complicated by a pitcher full of narcotic gazpacho and her friend Candela (María Barranco), a ditzy beauty wanted by the police for associating with Shiite terrorists. Through it all, the indefatigable Pepa fights gallantly against her crushing heartbreak. As a testament to the resilient beauty of women, this free-spirited film rings true and is a treasure. Also appearing are Chus Lampreave, Kiti Manver, Yayo Calvo, and Guillermo Montesinos as the hilarious driver of the Mambo Taxi.

Set in Madrid, Pedro Almodóvar's WOMEN ON THE VERGE ON A NERVOUS BREAKDOWN features two lovers who dub films for a living. They enjoy a long-term relationship until the man abruptly pulls out, shocking the woman and sending her on a frantic search to locate him.

All About My Mother
$26.40 Super Savings
Add to Cart