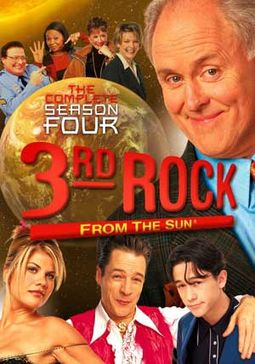 Going Where No Aliens Have Gone Before: Earth! Back for a fourth season, Dick Solomon (John Lithgow), Sally (Kristen Johnston), Harry (French Stewart), Tommy (Joseph Gordon-Levitt) and Dr. Albright (Jane Curtin) along with their co-stars Don (Wayne Knight), Nina (Simbi Khali), and Miss Dubcek (Elmarie Wendel) continue to amuse us with their uninhibited and candid reactions to life as humans. In this season, Harry works as a sideshow freak at a carnival and doesn't want to return to the group, Mary is promoted to Dean and Dick assumes that he has some power as her boyfriend. Dick finds a new love interest, Jennifer (Laurie Metcalf) and the Big Giant Head (William Shatner) visits the 3rd Rock from the Sun--and scores an Emmy nomination in the process

A science-fiction-themed sitcom, 3RD ROCK FROM THE SUN looked at the absurdity of human behavior and society from the perspective of a literal outsider. Four alien beings have been transported to Earth in order to more closely study mankind. Landing in the town of Rutherford, Ohio, each member of the quartet takes on a human appearance, forming the "Solomon" family: leader Dick (John Lithgow), sophomoric Harry (French Stewart), man-trapped-in-a-woman's-body Sally (Kristen Johnston), and eldest member (in the form of a teenage boy) Tommy (Joseph Gordon-Levitt). As they set out to examine the habits of the humans around them, the team experiences the human emotions of love and loss, and encounters many comic misunderstandings from their too-literal readings of human words and actions. Using clever writing and acting rather than gaudy special effects to convey "alien-ness," 3RD ROCK FROM THE SUN was one of television's most unusual comedy series. This collection includes all episodes from the fourth season.