Ed Kowalczyk The Flood and the Mercy 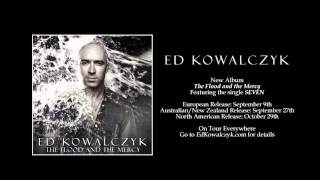 Ed Kowalczyk - The Flood and The Mercy Preview (Music Video)

Lyricist: Ed Kowalczyk.
Personnel: Ed Kowalczyk (vocals, guitar, background vocals); Jamie Candiloro (guitar, keyboards, drums, background vocals); Lang Freeman, James Gabbie, Fran‡ois Maigret (guitar); Scott McCaughey (keyboards).
Recording information: Banana Chicken Studio, Hollywood, CA.
Photographer: Douglas Sonders.
Launching a solo career proved to be slightly difficult for Ed Kowalczyk, the frontman for Live. Never mind whatever legal battles he had with his previous band: he had trouble separating his present from his past, succumbing to soul-searching introspection on his 2010 solo debut Alive. Three years later, he's banished hesitation from his vocabulary and has plowed ahead with the tuneful, forceful sophomore set The Flood and the Mercy. The title suggests biblical ramifications, implications the album doesn't deny, but the notable thing about this 2013 album is the confidence of Kowalczyk as a composer and performer. The Flood and the Mercy retains the arena rock force of prime Live, but there is light and shade here, with some of the texture deriving from the presence of R.E.M. guitarist Peter Buck, who plays on over half the album. Singer/songwriter Rachael Yamagata is also present, co-writing and sometimes singing, and Kowalczyk's enthusiastic embrace of collaborators does give The Flood and the Mercy a confidence, variety, and depth that were generally missed from Alive. Surely, he remains the ringleader -- the songs are thoroughly his creation, forceful impassioned arena rock that is designed to convert -- but Buck and Yamagata reign in his excesses and broaden his scope, so this winds up tight, tuneful, and impassioned, the best and least pretentious collection of tunes Kowalczyk has assembled since Live became stars. ~ Stephen Thomas Erlewine

31%off
Live
Live at the Paradiso Amsterdam [Australian Import]
$8.98 on Sale
Add to Cart