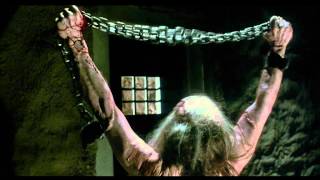 Director Stuart Gordon delivers another chilling tale with CASTLE FREAK. A dysfunctional American family learns that they have inherited a 12th-century Italian castle and travels to visit it. As soon as they arrive, strange things start happening--bizarre noises come from deep within the castle, and objects turn up mysterously broken. The family's blind daughter begins telling stories of someone visiting her room at night. When two bodies are found in the dungeon savagely murdered, the family must unlock the castle's evil past in order to save themselves from a similar fate. Dispensing his usual 50/50 mix of horror and comedy, Gordon makes this an out-and-out horror film complete with monsters, old castles, and plenty of bumps in the night. Excellent writing and good performances give CASTLE FREAK depth and character development rarely found in horror films, making the scares all the more effective.

When an American family moves to Italy to occupy a castle they've inherited, they unwittingly unleash a terrible, bloodthirsty creature, somehow tied to a dark family secret.