Adventure doesn't come any bigger than this. 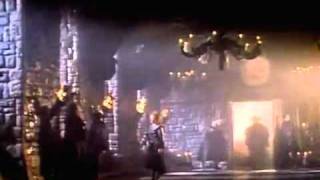 Based on a story by STAR WARS creator George Lucas, WILLOW is director Ron Howard's fantasy world of medieval adventure. WILLOW stars Val Kilmer as Madmartigan, a swashbuckling warrior, and Warwick Davis as the title character. In a mythical kingdom, the evil sorceress Queen Bavmorda (Jean Marsh) plots to kill all infants so that the newborn princess, Elora, will never take over the throne. But a midwife sets the baby adrift in a river, and she is rescued by Willow, a farmer in Nelwyn, a peaceful village of trolls, fairies, and little folk. Willow and Madmartigan begin a quest to deliver the baby from evil while being chased by Queen Bavmorda's daughter, Sorsha (Joanne Whalley), sent to bring the baby back to Nockmaar. Director Howard benefited from his affiliation with George Lucas on the film--Lucas's company, Industrial Light and Magic, contributed the Oscar-nominated special effects. Lucas, the executive producer of WILLOW, went on to create a series of books based on the world of WILLOW, the SHADOW WAR series.

In this quest fantasy, a timid yet valiant Halfling is entrusted with delivering a royal infant from evil. His journey is often dangerous and sometimes comical as he meets up with some colorful characters along the way. Academy Award Nominations: Best Sound Effects Editing, Best Visual Effects.