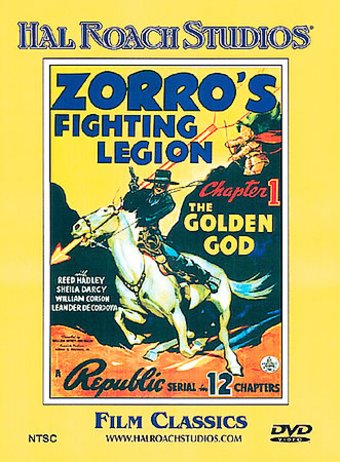 Currently Out of Stock: We'll get more as soon as possible
Notify Me When Available
Add to Wishlist
Format:  DVD
item number:  XTX 03013D
91% recommend us!

Zorro comes to the rescue once again when Mexico comes under attack from the infamous Don Del Oro. As the people of Mexico become further and further oppressed by the shadowy Del Oro, Zorro pulls off all his tricks and stunts to recapture the floundering nation and save the day!

Mexico is under siege from the nefarious Don Del Oro, who's passing himself off as an ancient sun god intent on oppressing the people. The only hope lies with everyone's favorite masked crusader for western justice, the one and only Zorro! A rip-roaring serial packed with swashbuckling, stunts and high-flying action, this whip-cracking classic remains a captivating yarn for Zorro fans of all ages.

43%off
Sheena Queen of of the Jungle: Includes 6 Features (DVD)
$3.98 Super Savings
Add to Cart