Down Beat: 5 Stars - Excellent - "...classic....the 62-year-old blues man employs his deep, raw vocals and urgent harmonica much as he had in the past, throttling songs...till they throbbed with menace..." 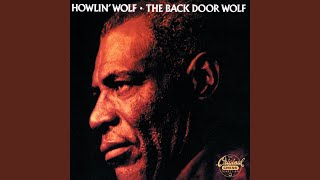 The Back Door Wolf (Music Video)

Down Beat - 4/96, p.55
5 Stars - Excellent - "...classic....the 62-year-old blues man employs his deep, raw vocals and urgent harmonica much as he had in the past, throttling songs...till they throbbed with menace..."
Living Blues - 3-4/96, p.79
"...these neglected cuts sound wonderfully fresh and infinitely better than so many blues recordings that have come since--and better, in retrospect, than most all of the blues being recorded at the time (1973). Wolf's vocal powers were undiminished and his harp skills still strong..."

Jethro Tull
Minstrel in the Gallery
$13.10
Add to Cart

Etta James
Blues To The Bone
$10
Add to Cart

29%off
Howlin' Wolf
The London Howlin' Wolf Sessions
$8.49 on Sale
Add to Cart


This was Howlin' Wolfs last recording. A prime-evil force in the blues, as well as rock.
There are some great tracks on this cd, but unfortunately, someone decided to record a couple of tunes, with an electric harpsichord!
The liner notes even try to justify it, but its way out of place here, amongst the swamplands of mississippi.
Essential listening, is either The Howlin' Wolf Chess Box Set, or the 2 for 1 albums on 1 cd, on chess.
Meet me in the bottom...

Ruth Brown
Mama He Treats Your Daughter Mean & Other Favorites (CD)
$6.97 on Sale
Add to Cart