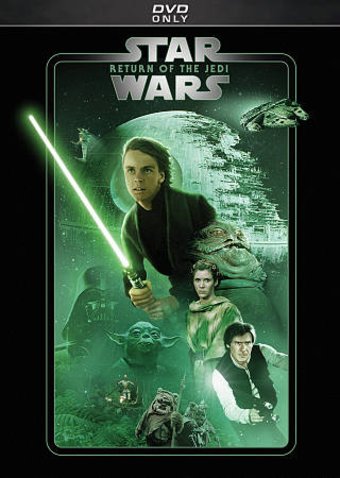 The third and final chapter in the wondrous STAR WARS saga is RETURN OF THE JEDI. Luke (Mark Hamill) must save Han Solo (Harrison Ford) from the clutches of the monstrous Jabba the Hut, and bring down the newly reconstructed--and even more powerful--Death Star. With Solo imprisoned, Luke accompanies his faithful droids R2D2 (Kenny Baker) and C3PO (Anthony Daniels) in a rescue bid, with Princess Leia (Carrie Fisher) and Chewbacca (Peter Mayhew) also lending a hand. After they valiantly disentangle their friends from Jabba's clutches, Luke returns to his Jedi Knight training with Yoda. Meanwhile, the Rebel Troops amass in an attempt to see off the impending threat from Darth Vader (played by David Prowse, voiced by James Earl Jones) and his new Death Star, with the operation being lead by Han Solo. But Luke must face Vader himself if he is to become a true Jedi Knight, and as he enters into a spirited battle with his light saber-wielding enemy, some surprising revelations await the young warrior.

Luke Skywalker embarks on a mission to find out if arch-villain Darth Vader is really his long-lost father, as Vader claimed in the cliff-hanger ending of "The Empire Strikes Back." Along for the ride are Princess Leia, Han Solo and other familiar faces from the first two movies. Jabba the Hut and the furry, adorable Ewoks are just some of the bizarre new creatures they encounter in this third action-packed, special effects-filled installment of the phenomenally popular "Star Wars" series.