Deliver Us from Eva R 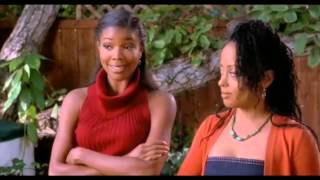 DELIVER US FROM EVA, directed by Gary Hardwick (THE BROTHERS), pits man against woman in a memorable battle royale of romance and comedy. Hardened by her parents' deaths, Eva Dandridge (Gabrielle Union, BRING IT ON) gives up her childhood dreams of horse training to provide for her three sisters in contemporary Los Angeles. The Dandridge sisters honor and obey Eva's every decision, often at the expense of their self-interested men. Fed up, the three men conspire to rid themselves of Eva once and for all, to restore order to their relationships and enact a little bit of revenge upon their enemy. They hatch a plan to unleash the ultimate player on Eva, Ray Adams (LL Cool J). A loner for life, Ray agrees to date Eva and then dump her, mostly for the challenge, but also for the money his pals promise to pay him for the deed. What he doesn't expect is to fall madly in love with the difficult, often-humiliating Eva, and the plot spirals when Eva herself falls for Ray but is offered a lucrative job in Chicago. A couple of raunchy beauticians round out the cast and provide a number of the laughs in this movie that tests the bonds between sisters, friends, lovers, and anything else that comes between.

Think Like a Man
$6.50 Super Savings
Add to Cart

Two Can Play That Game
$9.50 Super Savings
Add to Cart