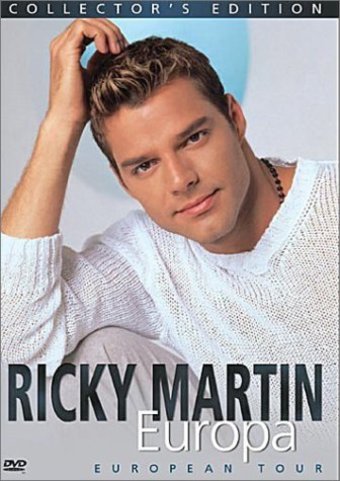 With his thousand watt smile and irresistible rhythms, Latin pop star Ricky Martin almost singlehandely turned Latino music into a mainstream pop trend. this release explores the man behind the phenomenon with more than one hour of candid, personal footage. The viewer gets to see Martin livin' his own "vida loca," as he travels through European on a sold-out tour. In addition, exuberant live performances from that tour are filmed, including "No Puedo Mas," "Susana," and "Nada Es Impossible."

See Ricky Martin as you have never seen him before: up close and personal. Travel with him on his sold-out European concert tour. Feel like you're a part of the exuberant crowds that dance and sway to his mesmerizing rhythms and gyrations as he performs his songs in different venues across Europe. Swoon to his sultry songs and sensual charisma in this exhilarating production featuring eight great performances and a bonus video clip. A must have collector's video! Songs: No Puedo Mas, Bombom De Azucar, Nada Es Imposible, A Medio Vivir, Susana, Dime Que Quieres, Maria, Te Extrano 2.

30%off
Ricky Martin / Christina Aguilera
Nobody Wants To Be Lonely
$3.49 Super Savings
Add to Cart
(6)