Suddenly the word is Alphaville... and a secret agent is in a breathless race against the Masters of the Future. 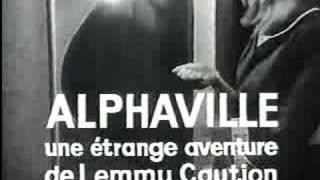 "All things weird are normal in this whore of cities."
- Lemmy Caution (Eddie Constantine)

A bizarre space-chase across a glass and metal landscape of futuristic Paris--here called Alphaville--is the movie's premise. Creating a dystopian "tomorrow" characterized by alienation and cold corporate comforts, Godard slyly suggests that the future is now. Secret agent man Lemmy Caution (Eddie Constantine) travels across the expanses of intergalactic space and time to uncover the fate of his missing predecessor. Working under the alias of Ivan Johnson, Caution is accompanied in his quest by the lovely Natasha Vonbraun (Anna Karina), the daughter of a supposedly missing professor. Caution later discovers that the elder Vonbraun is the mastermind behind Alpha 60--the rigid, masterful computer that governs Alphaville. Alpha's job is to crush individuality, eradicating any human being who does not conform. Ultimately, Lemmy is left with no other choice but to destroy the calculating chip-and-wire monolith, with the only weapons he has left: his heart and soul.

Made in U.S.A. (Criterion Collection)
$26.40 Super Savings
Add to Cart