4.4K ratings
Currently Out of Stock: We'll get more as soon as possible
Notify Me When Available
Add to Wishlist
Format:  DVD
sku:  LMTB 82427D
92% recommend us! 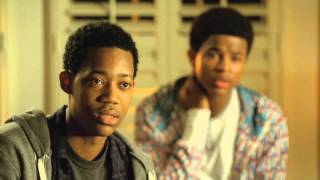 A young hip-hop hopeful from Atlanta, Georgia fights to keep his dreams from slipping though his fingers when his best friend takes the credit for all of his creativity, and the girl he loves starts to fall for the wrong guy in this contemporary take on the tale of Cyrano de Bergerac. Cyrus DeBarge (Tyler James Williams) is a talented young lyricist who should be up on the stage instead of bussing tables. But his father (Courtney B. Vance) fals to see the value in hip-hop, and without the confidence to face the crowd, Cyrus' talent will never truly shine. When Cyrus and his best friend Kris (Trevor Jackson) learn that their old friend Roxie (Coco Jones) is sponsoring a major songwriting contest, Cyrus dubs himself "Truth" and filters his feelings for Roxie into a rhyme that takes the top prize. But there's a catch; Kris has been credited as the lyricist, and to make matters worse, smitten Roxie is none the wiser. Later, as the girl he loves starts to slip away and Kris refuses to give up the charade, Cyrus realizes that the time has come to stand up, let the truth be known, and take his one shot at stardom.

16%off
Phineas and Ferb: The Movie - Across the 2nd Dimension
$12.60 Super Savings
Add to Cart