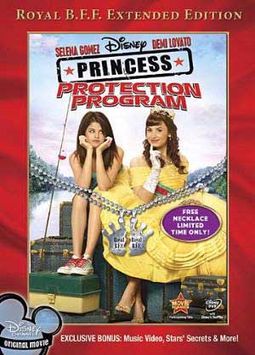 When the beautiful Rosalinda (Demi Lovato) is forced to enter the "Princess Protection Program," the pampered royal must move in with a tomboy named Carter (Selena Gomez). Though at first the girls seem to have nothing in common, they soon bring out the best in each other: Rosalinda gets a lesson in grace and humility, while Carter learns to embrace her fabulous femininity. This hit Disney Channel original movie is a fun and funny fairytale for tweens, and offers terrific behind-the-scenes footage of Lovato and Gomez dishing about their friendship on and off the set. The release also includes the featurette "A Royal Reality," which features a real-life princess revealing the truth about a life spent in castles and ballgowns!

Get ready for a hilarious and heartwarming royal reality check in PRINCESS PROTECTION PROGRAM, the new smash-hit Disney Channel Original Movie starring Selena Gomez (WIZARDS OF WAVERLY PLACE) and Demi Lovato (SONNY WITH A CHANCE)! Plus, this Royal B.F.F. Extended Edition DVD features an insider's look at the realities and responsibilities of being a real-life princess, and lets you listen in as real-life best friends Selena and Demi dish about their lives on and off the set! The worlds of royalty and roughing it collide when the lovely Rosalinda (Lovato) enters the Princess Protection Program and moves in with her new "cousin" Carter (Gomez), a total tomboy. In an unexpected role reversal, "Rosie" learns how to act like an everyday girl and Carter finds her own inner princess. Once they discover what they have in common, they prove that best friends really are forever!

20%off
Hannah Montana The Movie
$4.98 Super Savings
Add to Cart

16%off
The Adventures of Brer Rabbit (DVD)
$8.40 Super Savings
Add to Cart