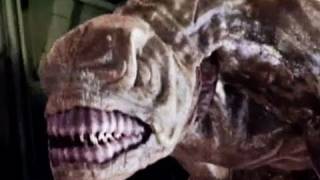 Corin Nemec (MANSQUITO, PARKER LEWIS CAN'T LOSE) stars in SEA BEAST, an exciting creature feature in which an unspeakable abomination emerges from the bowels of the deep sea to terrorize the inhabitants of a small fishing village and hatch its deadly offspring. And just when it seems safe to frantically retreat back to land, it turns out this amphibious monstrosity has arms, legs, and the ability to breathe air...not to mention a repulsive projectile tongue. The Creature from the Black Lagoon has nothing on this fish. Also known as TROGLODYTE, this slimy and slippery thriller comes from Paul Ziller, the director that brought monster-movie fans LOCH NESS TERROR.