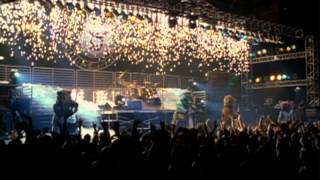 A bear raised in a human environment, Beary (Haley Joel Osment), is a confused adolescent, despite his loving home. His sanctuary is in a disbanded musical act, the Country Bears, to whom he has a strong connection and is fanatical about. So it is no surprise when Beary runs away to find his real family that he winds up at Country Bear Hall, the landmark site of so many of those memorable Country Bear gigs, now little more than dust and kindling and just days from being demolished by greedy banker Reed Thimple (Christopher Walken). The few Bears who remain prepare to move away from their hall and their Kentucky bluegrass. That is, until Beary arrives, convincing them to hop in the old Hiber Nation tour bus and track down the other band members for a reunion concert in hopes of saving the historic venue. This search for the members of the influential group proves difficult with the Bears all in varying states of desperation and a pair of bumbling cops (Daryl Mitchell and Diedrich Bader) tracking them. Ultimately, the Country Bears and their biggest fan use this road trip to gain an understanding of the true meaning of family.

The Country Bears
Disney's legendary group comes alive as The Country Bears star in their first feature film. Chronicling one of the most heartwarming family adventures ever, THE COUNTRY BEARS is packed with hilarious comedy, fantastic fun, and foot-stomping music for the whole family. For Beary Barrington, The Country Bears' young #1 fan, fitting in with his all-too-human family is proving im-paws-ible. When he runs away to find Country Bear Hall and his heroes, he discovers the venue that made them famous is near foreclosure. Beary hightails it over the river and through the woods to get the Bears in the Band back together for an all-out reunion concert to save Country Bear Hall. And on the way to find his place in the world, Beary learns that true families are made up of those people who love you the most!