May the best moves win.

855K ratings
Available: Usually ships in 3-5 business days
Only 5 copies left
Add to Cart
Add to Wishlist
Format:  Blu-ray
item number:  6S3GE
Also released as:
Bring It On for $13
Bring it On (Family Friendly Version) for $14.50
Our customers love us! 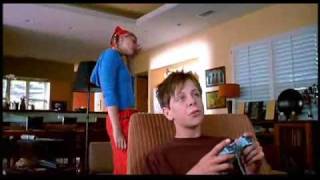 Bring It On 2000 Movie Trailer

"Omigod! My whole cheerleading career has been a lie."
- Torrance Shipman (Kirsten Dunst)
"Is that your band'"--Torrance, pointing at Cliff's T-shirt
"The Clash'! No, English punk rock band circa 1977-1983, original line-up, anyway."
- Cliff (Jesse Bradford)
"Can we just beat these Buffies down'"
- Jenelope (Natina Reed), referring to Torrance and Missy Pantone (Eliza Dushku, who appeared as Faith on many episodes of BUFFY THE VAMPIRE SLAYER)
"You've been touched by an angel, girl."
- Jenelope to Missy (Dushku also appeared as Faith on the BUFFY spin-off ANGEL)

Stellar Kirsten Dunst, as cheerleading captain Torrance Shipman, leads six-time defending cheerleading champions the Toros against a talented inner-city squad, the East Compton Clovers, in BRING IT ON. The film presents a lighthearted, slightly quirky exploration of the cutthroat but perky world of professional cheerleading competitions.

Only days after taking over the reins of her hallowed suburban high school squad, Torrance is presented with the ugly truth about her team's success when a new recruit, Missy (Eliza Dushku), a semi-outcast gymnast, realizes that the Toros' cheer was stolen from another team. Missy takes Torrance to inner-city L.A. to see the same routine being performed by the East Compton Clovers. The Clovers throw down the gauntlet; they are going to challenge the Toros for the national championship on ESPN 2. As if having to find new cheers were not enough trouble, Torrance also has romantic decisions to make: She has to choose between her oily but pretty current boyfriend and Missy's less popular but rocking brother, Cliff (Jesse Bradford).

BRING IT ON melds a hint of the satire in such movies as SMILE and DROP DEAD GORGEOUS with the competitive fire of films such as THE KARATE KID and WHITE MEN CAN'T JUMP to provide a captivating story enhanced by the engaging performance of rising star Dunst.

In a contest to lead her school to victory in the national cheerleading championships for the sixth year in a row, Torrance Shipman (Kirsten Dunst), team captain of the San Diego Toros at Rancho Carne High School, must show her team how to beat out its rival squad, the Clovers. Clovers' captain Isis (Gabrielle Union) is struggling to raise enough money to make it to the competition, while Torrance is facing up to finding out that her team's cheers are not original. A comic face-off between die-hard cheerleaders, BRING IT ON has teen spunk, team spirit, and lots of girl power.

Bring It On: All or Nothing
$8.70 Super Savings
Add to Cart

Bring it On Again
$8.70 Super Savings
Add to Cart