A woman torn between a man and a memory 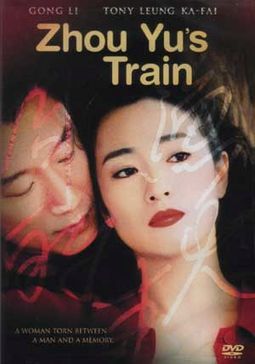 Gong Li, star of such epics as RAISE THE RED LANTERN and JU DOU, is unforgettable as the title character in ZHOU YU'S TRAIN, the poignant story of an unusual love triangle set in the Chinese countryside. Zhou Yu is an impulsive woman who makes porcelain pottery for a living, painting each one exquisitely. After meeting shy poet Cheng Ching (Tony Leung Ka Fai), she starts visiting him, taking a two-hour train ride twice a week from Sanming to Chongyang. On that train she is pursued by Dr. Zhang (Honglei Sun), a country vet who is intrigued by both her and a porcelain vase she has made. While Cheng Ching remains tentative, unable to completely commit to her and his poetry, Zhou Yu's burgeoning friendship with Zhang threatens to turn into something more.

Cowriter/coproducer/director Sun Zhou has crafted a beautifully alluring film in ZHOU YU'S TRAIN, set among the lush green countryside of China. One particularly gorgeous scene involves Zhang and Zhou Yu searching for a lake that Cheng Ching has compared to his lover. The complex story is told in nonlinear fashion, with scenes from the past converging onto the present in repeated ways that shed new light on the characters and their relationships. Gong Li is outstanding in a dual role, her eyes dancing across every scene. In only his second film, Honglei Sun shows remarkable depth. Wang Yu's stunning cinematography and Shigeru Umebayashi's haunting score add yet more wonder to this softly bittersweet film.

In the Mood for Love (Criterion Collection) (2-DVD)
$26.40 Super Savings
Add to Cart

The Canterville Ghost
$19.80
Add to Cart

In the Mood for Love (Criterion Collection) (Blu-ray)
$34.90 Super Savings
Add to Cart