What to Do in Case of Fire R 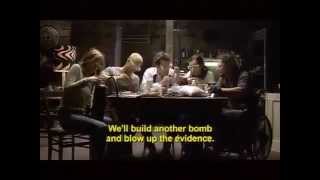 In the 1980s, Tim (Til Schweiger), his girlfriend Flo, and their roommates Terror, Hotte, Nele, and Maik--collectively known as Group 36--live as anarchist punks in an abandoned West Berlin building and film their subversive acts. The group disbands when the authorities evict the city's squatters, but not before Tim and company place a homemade bomb behind the door of an empty mansion. Fifteen years later, Tim and wheelchair-bound Hotte are still squatting--the only members of Group 36 who have stuck to their ideals. When the long-forgotten bomb is detonated, nearly killing two innocent people, veteran police detective Manowsky finally has an excuse to prosecute the former pranksters. Tim and Hotte are reunited with their old cohorts--who have become capitalists--as they attempt to prevent Manowsky from getting his hands on evidence that could incriminate them.

This German tale of friendship and change, the first from director Gregor Schnitzler, subverts its glossy production values with a distinctly anti-authoritarian tone. Opening with an energizing montage of the young characters clashing with police to a German punk song, WHAT TO DO IN CASE OF FIRE' immediately invigorates its audience with a strong sense of time and place. The likeable cast, headed by Schweiger (a major star in his native country) as a protagonist of dubious moral character, carries this unique and enjoyable coming-of-age tale.