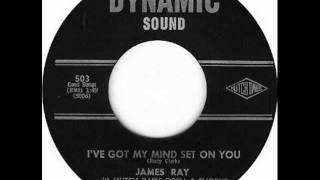 James Ray, who died soon after his success as a singer, was living on the streets of Washington DC when he was discovered and signed to his first recording contract. He had his biggest hits in 1961 and 1962 with "If You Gotta Make A Fool Of Somebody" and "Itty Bitty Pieces". This set of classics includes Ray's most popular recordings as well as his version of "I've Got My Mind Set On You", which was later became a big hit for George Harrison.

Unknown Contributor Role: James Ray.
Collectables' Golden Classics: If You Gotta Make a Fool of Somebody may not be as extensive or as well-annotated a collection as one could hope for, but nevertheless, it is the only collection of James Ray's material on CD; and it is quite worthwhile for that. During the early '60s, Ray straddled the line between R&B and pop. His productions and choice of material often favored supper-club crossovers -- as the inclusion of "Lazybones," "St. James Infirmary," and "Come Rain or Come Shine," here prove -- and even his R&B-oriented material was given elaborate productions similar to Sam Cooke's pop productions. This collection might be tilted toward the supper-club crowd, but his sweet voice stands tall throughout this, and his best material -- "If You Gotta Make a Fool of Somebody," and "I've Got My Mind Set on You, Pt. 1" (later covered by George Harrison) -- prove that Ray was a very good pop-soul singer, and they make this worth hearing. ~ Stephen Thomas Erlewine