24K ratings
Currently Out of Stock: We'll get more as soon as possible
Notify Me When Available
Add to Wishlist
Format:  Blu-ray
sku:  377KG
Our customers love us! 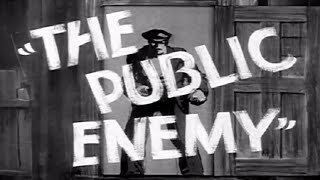 In William Wellman's classic crime film THE PUBLIC ENEMY, James Cagney does a star turn as Tom Powers, a trouble-ridden individual who rises from the position of cheap thug to that of a powerful Prohibition gangster. When his best friend is murdered, Powers self-destructively seeks deadly retaliation. He picks fights. He slaps women around. He roughs up speakeasy owners and tells them whom they'll get their hooch from and how much they'll order. Fists, kisses, and guns are the only things Tom knows. He eventually gets promoted to become the muscleman of mobster Nails Nathan (Leslie Fenton). But Tom's violent acts are about to catch up with him. After Tom guns down a cop, he's on the run. Later, thugs dump him, beaten, on the doorstep of his estranged and horrified family. It's only then that Tom realizes his decision to live the gangster life has been an irrevocable and deadly choice. Known as the picture that launched Cagney into stardom, THE PUBLIC ENEMY doesn't hold back from exposing the violence and tedium underscoring this ostensibly sexy life of crime. The screenplay, based on a story entitled BEER AND BLOOD by John Bright and written by Harvey F. Thew, was nominated for an Academy Award.

Tom Powers enjoys proving to others why he is the Prohibition era's public enemy number one. But things are about to change.