Our time is up. 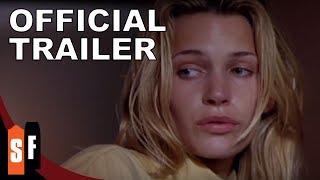 A genetically engineered, shape-shifting creature with extraterrestrial intelligence adopts the form of a beautiful woman to mate with humans and unleash a brood of offspring that will destroy mankind. A team of experts must band together to stop her--it--from accomplishing its diabolical mission. Special editions contain behind-the-scenes footage with creature creator H.R. Giger.

A team of scientists decide they must gas to death a young girl named Sil. Why' Because she is the result of an experiment in which human DNA was mixed with that of a (possibly nefarious) alien race. But Sil has plans of her own, so she breaks out of the gas chamber and escapes. This prompts Fitch, the head scientist, to gather a team to track the child down. Unfortunately, they may have trouble recognizing their prey, because Sil has turned herself into a lethal, sexy, adult woman... whose goal is to procreate as soon as possible. The fetching mutant embarks on a number of sexual encounters -- most of which have gruesome results for her partners.
Will Sil, who finally changes into a hideous, slimy monster, defeat our heroes... and breed a new generation of mutants'