Q (Magazine): 3 stars out of 5 -- "The frantic 'Keep Yourself Alive' still sounds fresh, while 'Liar' and 'Son & Daughter' impress with their swagger and manic harmonies..." 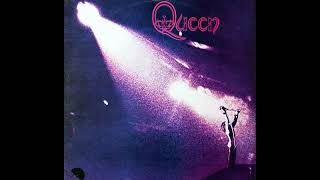 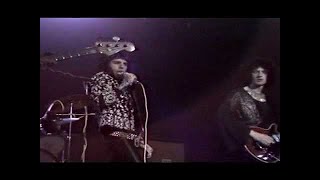 Personnel: Brian May (vocals, guitar, piano); Freddie Mercury (vocals, piano); Roger Taylor (vocals, percussion); John Deacon (bass guitar).
Recording information: De Lane Lea Studios (12/1971-11/1972).
Photographer: Douglas Puddifoot.
Queen's 1973 debut is definitely their most underrated album of that decade. Although most tracks aren't as well known as the band's later material, QUEEN proves to be an impressively consistent listen from beginning to end. It's extraordinary how many of the group's future musical trademarks were already detectable in their debut--Brian May's orchestrated guitar harmonies, multi-tracked vocal "choirs," imaginative songwriting and dynamics that could switch from head-banging heavy metal to reflective balladry in the blink of an eye.
Although QUEEN was recorded off and on over a three-year period, the tracks still manage to be focused and unified. The rocker "Liar" contains a middle section that foreshadows Queen's future hits (1975's "Bohemian Rhapsody," 1976's "Somebody To Love," etc.) while "The Night Comes Down" and "Doing All Right" are two gorgeous ballads. But make no mistake: the majority of QUEEN is raucous hard rock--see "Great King Rat" and the grand Zeppelin groove of "Son & Daughter." Also included as a CD bonus track is the forgotten composition "Mad The Swine," and an instrumental version of their future hit "Seven Seas Of Rhye."